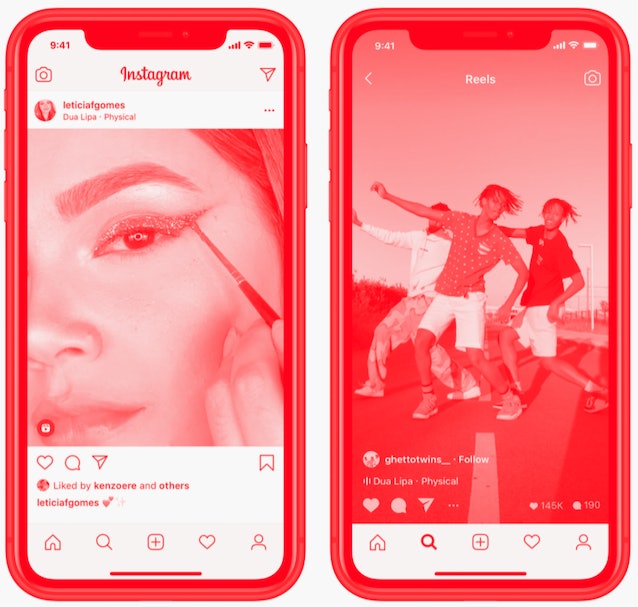 Instagram is officially launching Reels, a new format that allows users to create short-form, edited videos with music. There's no way around it: Reels is a clone of TikTok dropping at a time when that company is fighting for its life amid threats of a U.S. ban.

Kick em while they're down — Instagram already allows its users to share videos in the app, but Reels encourages creativity through limitation by restricting video to 15 seconds. Now when you open the Instagram camera you'll see a new Reels section at the bottom. Reels also comes with extra editing tools, like the ability to stitch together multiple videos and insert songs. Recordings can be aligned so you can line up transitions — maybe you want your outfit to change when you hop in the air. Videos can be sped up or slowed down at whatever moments in the timeline you select. There's even a way to use audio from other people's reels in your own.

Legislators have raised alarms about TikTok's ownership by China-based ByteDance, and President Trump has threatened to ban the app if its U.S. operations aren't sold to Microsoft by September 15th. Facebook CEO Mark Zuckerberg, meanwhile, has capitalized on fears that TikTok is sending user data to China in an attempt to deflect criticism of Facebook's own privacy practices. There's no evidence that TikTok has ever cooperated with the Chinese Communist Party, though it could be compelled to do so.

Capturing the magic — Reels is getting a dedicated tab in the Explore section and on user profiles. Once you've made a reel you can choose to share it to the Explore section or to your feed, or both. If you share a reel in your Story or just DM it to a friend, the reel won't appear in Explore or on your profile. If you share your reel to Explore and Instagram decides to feature it, you'll get a notification.

As you can see, Reels looks quite similar to TikTok:

Importantly, Instagram is trying to capture the addictiveness of TikTok by customizing the section in Explore to your tastes. TikTok is known for having an addictive feed that causes people to lean back and binge videos. Instagram has struggled for a long time to make its Explore tab popular in the same way. Making Explore popular could help Instagram because it's another section through which to push advertisements.

Yes, but — It's easy enough for a $700 billion company like Facebook to clone other apps, and it does so often, but being able to capture the same success is a different challenge. After Trump announced a potential ban, popular TikTok users began encouraging their fans to follow them on Instagram. If it doesn't get banned, it would be difficult to see users depart TikTok in droves, at least not immediately.

The app managed to reach a massive scale before Facebook pounced, and recently made a smart move when it announced it will pay popular creators for their work. Instagram also just isn't thought of as an entertainment platform in the same way that TikTok is — whereas TikTok has viral meme challenges, Instagram is known for being a highlight reel of one's best memories.

That being said, the power of Facebook is that because it's so large, any feature it releases tends to become very popular, very quickly. Instagram can just plug in the Reels feature and it'll surely get hundreds of millions of users even if it doesn't "beat" TikTok, just like it did when it pulled Stories from Snapchat. That company didn't die, but many believe its growth was stopped short by Instagram. You have to wonder if Reels will help Microsoft in its negotiations to buy TikTok.