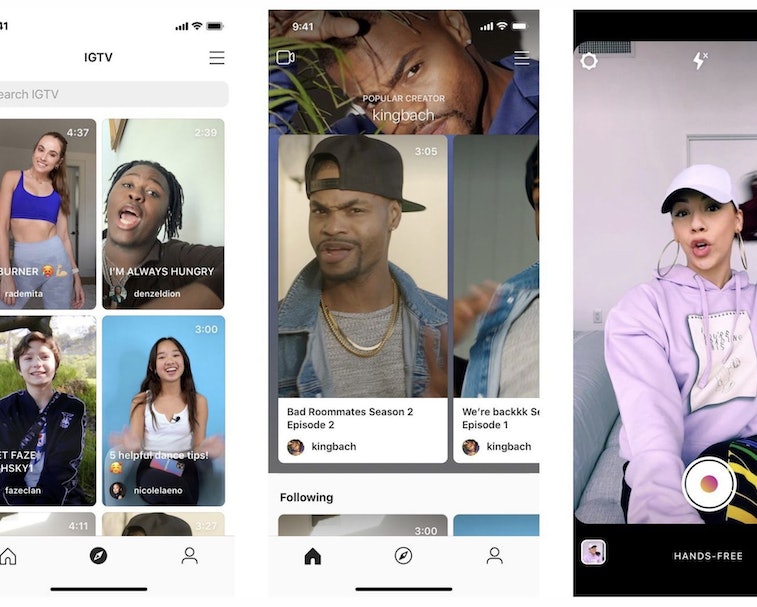 Instagram told The Verge on Monday it's unveiling several changes to its IGTV app. The main page will now feature a creator based on a user’s viewing history, creators now have a hands-free mode allowing in-app content production, and IGTV posts now play a preview in Instagram Stories. In short, Instagram is launching... TikTok?

The updated app also now offers a Discover page to help users find new creators more easily. The updates are live for the iOS app but have yet to hit the Android version. Despite billing IGTV as the “future of video,” Instagram’s tweaks already exist on TikTok, Snapchat, and even newcomer — and notoriously feature-light — Byte. At least, for now, the IGTV button isn't coming back to the main Instagram app. Leaving it as a standalone makes it easier for us to continue to ignore it, and for that we're grateful.

What’s new? — Users can now — in 2020, two years after launch — record and edit directly in the IGTV app. Previously, videos had to be uploaded through the app or website. While not having in-app video capture and editing was a glaring oversight for IGTV, Instagram’s own in-app camera only recently got to the point where it can be used to create palatable videos, which is likely why the feature is only now going cross-platform.

A hands-free mode opens up an even wider range of possibilities for creators without full teams, especially now that everyone’s isolating. Though a welcome addition, this kind of recording exists as a timer function in Snapchat, TikTok, and Byte, and has done pretty much since each launched.

On the promotional front, IGTV creators also benefit from a 15-second-or-less preview instead of the traditional static thumbnail on IG Stories. Within the IGTV app, it’s clear Instagram is gassing up its creators by spotlighting one on its main page and adding a Discover page.

IGTV wants its own seat — Back in January, Instagram axed the IGTV navigation button. At that point, only 7 million people had downloaded the standalone app, and Instagram still isn’t providing numbers on how many of its billion-plus users access IGTV, so we suspect usage hasn't changed much.

A month ago, Bloomberg reported Instagram was getting into the ad game on IGTV and had started reaching out to creators to be part of a revenue-sharing program. The plan, in which creators nab a 55 percent share of ad revenue, sounds remarkably familiar to Byte’s Partner Program. Byte’s program hands over all the ad revenue to creators (for now.)

Instagram already yields an estimated 20 percent of ad revenue for Facebook and generally does better in the court of public opinion. If it can succeed at getting more eyes to IGTV videos, it can monetize them and fuel growth for Facebook, which is seeing its own growth stagnate as it reaches market saturation. Even though Instagram is hardly reinventing the wheel on digital video with IGTV, Stories is a great example of how Facebook's sheer market dominance can turn a cribbed feature into a brand staple and money-spinner.