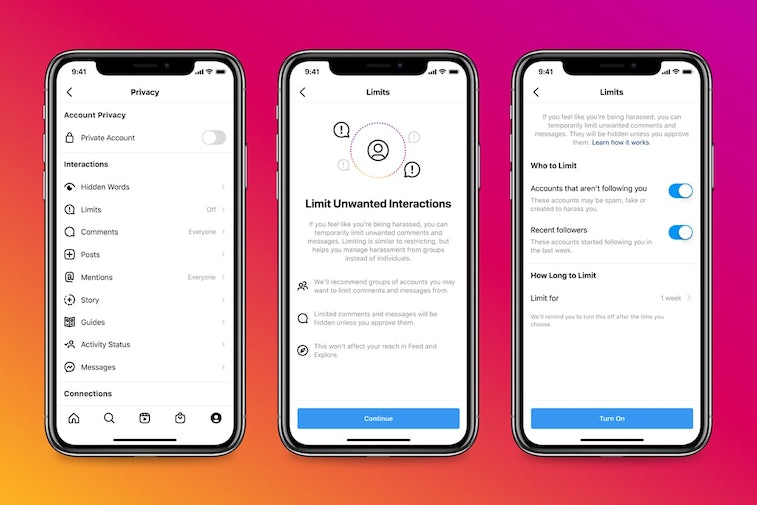 Instagram is introducing a number of new settings this week to allow users more control over how the general public interacts with their accounts. These features are meant to slow the spread of hate on the platform, which all too often slips through the cracks in Instagram’s moderation systems.

“We don’t allow hate speech or bullying on Instagram, and we remove it whenever we find it,” writes head of Instagram Adam Mosseri. “We also want to protect people from having to experience this abuse in the first place, which is why we’re constantly listening to feedback from experts and our community, and developing new features to give people more control over their experience on Instagram, and help protect them from abuse.”

The most notable new feature, called “Limits,” allows users to quickly draw a hard line around who can comment on posts and send them Direct Messages. Limits, along with a few other new settings, puts hate control in the hands of individual users — a trend that, while perhaps not ideal, has huge potential to positively impact the Instagram experience.

Set your own Limits — Limits, which is available for users around the world beginning this week, is a set of new toggles that allows you to choose who’s allowed to comment on your posts and send you DMs. Mosseri notes that most users who experience spikes in hate receive that hate from accounts that haven’t followed them for very long (if at all).

Limits is accessible as a new section in the Instagram app’s Privacy settings page. Users can choose who to limit messages from: accounts that aren’t following them, recent followers, or both. There’s also an option to have Instagram remind you to turn Limits off after a certain period of time (once the worst of the hate has passed).

More anti-abuse filters, too — Instagram is also expanding its more automatic anti-abuse filtering systems. There’s already an automatic warning that pops up for users when they’re about to post a potentially hateful comment, but Instagram is now making the first warning a stronger one. The company says about 50 percent of the time this warning actually does work, prompting the user to delete or edit their comment.

Instagram is also opening up its “Hidden Words” feature to all global users this week after a successful test run. Hidden Words automatically filters DM requests that include offensive words, phrases, and emojis, moving them to a new Hidden folder in the user’s inbox.

These updates provide some significant protections for Instagram users; they approach hate from various angles in the hopes of stomping most of it out before it even reaches you. That’s especially meaningful coming from a company that has, in the past, generally profited off hate.