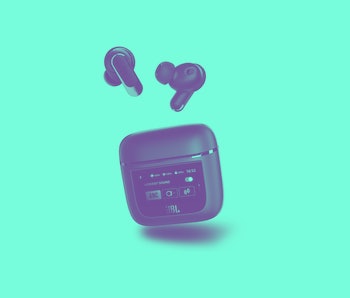 JBL’s new Tour Pro 2 is a wireless earbuds solution in search of a problem. Announced alongside a pair of much more traditional pair of over-the-ear wireless headphones called the Tour One M2, the Tour Pro 2 really stands out because of its case; it has a touchscreen, and can apparently receive notifications from your phone.

Touchscreen case — The 1.45-inch LED “touch display” will probably be most useful for adjusting the settings on your wireless earbuds. JBL says you can “manager your music” and “customize your earbuds,” and the images the company shared show a toggle for ANC and an ambient sound mode accessible on the display, along with the current battery life and time.

But the Tour Pro 2 case can also answer calls, receive messages, and display social media notifications if those are things you want your wireless earbuds case to do. Think of it like a modern-day pager that also charges your headphones.

The idea certainly has its appeal. Not everyone has, or wants, a smartwatch, so why not get similar functionality from some other product? But it’s also not really doing anything other than putting your phone notifications in a different place. JBL isn’t alone here — most 21st-century products are about managing the increasingly stressful and on-demand nature of life as opposed to eliminating it. But still, the product sounds weirder the more you think about it.

Sounds good — Luckily, JBL seems like it’s otherwise releasing a premium pair of wireless earbuds, so you should be able to ignore that entirely. The Tour Pro 2 feature “True Adaptive ANC” which translates to active noise cancellation that automatically adjust to your surroundings, JBL’s answer to Spatial Audio, a total of 50 hours of playback between the earbuds and the case (10 hours in the case), and support for Bluetooth 5.3.

The Tour One M2 comes with the same basic audio features as its earbuds siblings, just with the dial turned up. There are 40mm dynamic drives in place of the Tour Pro 2’s 10mm drivers, 50 hours of playback, adaptive ANC, and Bluetooth 5.3.

Unfortunately, both the JBL Tour Pro 2 and One M2s will only be available in Europe when they come out in January 2023, for €249 and €299 respectively.