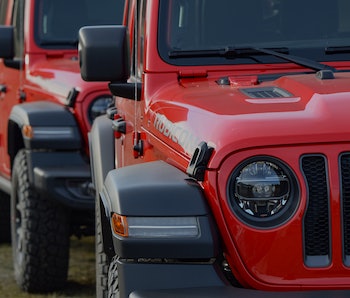 Jeep this week released teaser images of a forthcoming concept electric vehicle — a moment many of the brand’s devoted fans have been waiting for. Too bad the all-electric Jeep is still essentially a pipe dream: no one knows when we’ll be able to pre-order it, never mind drive one off the lot.

The battery electric vehicle (BEV) was first teased during a Super Bowl ad this past weekend along with a Jeep webpage called “The Road Ahead.” Visiting that page is an exercise in abstract, future-forward concepts without any tether to time or place: plenty of ideas and vision but nothing all that concrete.

“The best is yet to come,” reads a large banner across the middle of the landing page. That may be true, but it’s difficult to latch onto Jeep’s ideas here. While the vast majority of carmakers have brought their all-electric vehicles to life (or plan to this year and next), Jeep is only just now teasing a concept all-electric vehicle — which is in itself essentially a teaser for an actual purchasable car.

Well, it's electric — Our knowledge of Jeep’s first all-electric vehicle is minimal at best — and by that we mean we really only know that it’s all-electric... and it looks like a Jeep.

“We plan to reveal a 100% battery powered Wrangler BEV concept vehicle as part of the Jeep Brand concept vehicles at the Easter Jeep Safari in Moab, Utah,” reads a small section on the site.

And that’s it. Well, there’s a similarly brief blurb about solar-powered charging stations that Jeep plans to install in various “iconic Jeep Brand locations” like Moab in Utah and the Rubicon Trail in California. Those are just concepts for now, too, though.

Lagging behind — Jeep is many things: a classic brand with a reputation for brash vehicles and an ultra-loyal fanbase. It is not, however, cutting-edge, and it hasn’t been for a long time.

Meanwhile, Jeep is only now, in February 2021, ready to show off a concept all-electric vehicle. When the vehicle will be available for purchase is anybody's guess. For all we know, it may never make its way to consumers’ driveways.

Jeep does have a hybrid electric vehicle, the Wrangler 4xe. That model wasn’t even introduced until this current production year, though. If it wants to be a serious EV player it had better hurry up or be left in rivals' zero-emission dust.

More like this
Jackson Chen
6.16.2022 5:50 PM
Tech
Cadillac’s Celestiq EV is going all in on 3D printed parts
Jackson Chen
22 minutes ago
Tech
Volkswagen's sleek ID.Aero concept is a blueprint for its EV future
Matt Wille
6.14.2022 6:03 PM
Vroom Vroom
BMW is testing an iX SUV with a driving range of 600 miles