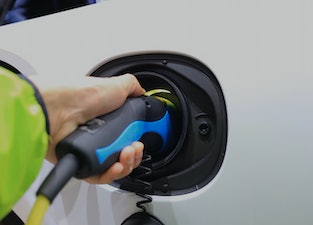 The share of Americans who report they would consider buying an EV as their next car.

New data out from the Pew Research Center finds that 39 percent of Americans surveyed are likely to consider buying an electric vehicle as their next car. And digging into the numbers suggests that number will only continue to increase because, well, Baby Boomers are eventually going to die, frankly.

Electric vehicle sales have been slow to take off in the United States, with just about 7 percent of Americans reporting they currently have an electric or hybrid car. But automakers are responding to changing regulatory guidelines and investing heavily in the development of the technology.

Okay, boomer — Specifically, the Pew survey found that consumer perception of electric cars varies wildly with age. Millennials (born between 1981 and 1996) are much more likely than Baby Boomers (1946-1964) to buy electric vehicles, with 47 percent willing to consider it versus 32 percent respectively.

That makes a lot of sense because younger people are generally more familiar with newer technologies and less inclined to be suspicious of them. Boomers might be reluctant over concerns like access to charging stations, which isn’t made any easier by the varying charging standards that new electric cars use (or completely proprietary networks like Tesla’s Superchargers).

Positive outlook — Thankfully, Pew finds that having at least some knowledge about electric vehicles increases openness to buying one. That makes sense, because these people might, for instance, understand that electric vehicles generally require less maintenance than gas cars.

More than half of Americans who are familiar with electric cars would buy one, according to the survey, while more than half of people who have little or no information on EVs wouldn’t consider buying one. Once someone does buy an electric car, they probably won’t ever look back — the research found that seven out of 10 EV owners would purchase another battery-powered car in the future.

Basically, if the world wants to transition away from fossil fuels, information about the pros of electric cars is going to need to become more widely available. But prices will similarly need to come down (people might care about the environment, but money takes first priority), and infrastructure should further develop to support the cars.