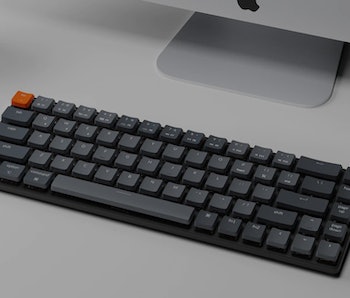 Looking for a wireless mechanical keyboard that’s thin and light enough to take on the go? You’re in luck. Keychron, the internet’s favorite mechanical keyboard maker, is back with the K7, a low-profile keyboard with a 65 percent layout that’s being crowdfunded on Kickstarter.

In recent years, Keychron has introduced many to the beautiful and complex world of mechanical keyboards, making affordable keyboards with superior functionality and features that punch above their respective price points. Though mechanical keyboards have exploded in popularity as a very expensive hobby, many users just want the experience of typing on mechanical switches in a svelter package that doesn’t take up a ton of desk space and fits better in a backpack. The K7 does just that.

Touted as its smallest and most portable mechanical keyboard to date, the K7 is Keychron’s eighth Kickstarter project; the campaign is off to a promising start, already raising over $175,000 in its second day of funding (as of the time of this writing). The K7 has many of the features included in previous Keychron keyboards and its 65 percent layout (68 keys) keeps the form factor as compact as possible without shedding the dedicated arrow keys. To achieve its 22mm thinness, Keychron is using low-profile switches that provide a mechanical keyboard feel without the bulkiness of a standard switch.

Clickety-clack — Not every switch is built the same, and not every one is right for you. Different switches work better for different tasks. For example, some are better for gaming and some for typing. Some switches are loud and some are quiet. The K7 includes several options from Gateron’s low-profile mechanical switch line as well as Keychron’s own low-profile optical switch. For the Gateron switches, there are linear red, clicky blue, and tactile brown switches to choose from. Keychron’s switches come in linear red, clicky blue, and three tactile options with varying actuation force, which include the brown, banana, and mint switches. This is the first time the latter two switches are being offered, and Keychron claims they have a similar feeling to the highly-praised Panda switches, which have the tactile bump at the beginning of the stroke, not the end.

Feature-packed — The K7 is a Bluetooth 5.1 keyboard with a 1,550 mAh rechargeable battery. Keychron claims it has 34 hours of battery life, but that may depend on backlight usage. The K7 comes with either a white or RGB backlight. RGB lights on the keyboard are not programmable via software, but there are 18 pre-selected colors and several modes to choose from. As with other Keychron keyboards, the K7 comes with both Windows and Mac-dedicated keycaps (three each), and it can be set to work with either operating system by toggling the switch on the back of the keyboard.

There are six options available for the K7, with the $64 white backlit Gateron version (not hot-swappable) being the cheapest, and the $84 hot-swappable RGB backlit Gateron version being the most expensive. If you want to get a K7, there are still 29 days to go for this Kickstarter campaign, which will end on August 13. According to the timeline on the campaign page, the board is expected to ship in September. Delivery dates for Kickstarter projects tend to not be set in stone, but just so you know, I backed the K8 and received mine on time. The stretch goals are the same as ever — switch puller, keycap puller, orange lighting keycap, and a braided cable — and it’s very likely all will be unlocked, which are included in every shipment.

Though I have a handful of mechanical keyboards, I’m thinking of getting this just to try the new mint switches. If you’ve never had the pleasure of typing on a mechanical keyboard or want one to bring with you on the go, the K7 sounds like a solid entry-level board at an affordable price.