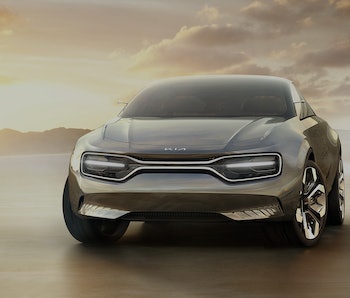 Korean carmaker Kia is following in countryman Hyundai’s footsteps by using an eye-catching concept car as the basis for a flagship production model designed to stake a claim in the EV sector. Dubbed the Kia CV, Auto Express reports, the all-electric crossover takes its design cues from the Kia Imagine, but it’s what’s going on inside that’s really attractive. Kia’s promising an 800V battery system that’ll allow for a full recharge from a compatible charger in under 20 minutes.

That 800V technology is the same sort as Porsche is putting in its Tesla Model S-rival, the Taycan electric SUV, but the similarities don’t stop there. Kia’s also promising a 0-60 mph time of under 3 seconds, and that’s also Taycan-rivalling. Size and brand-name prestige aside, though, what’s really going to set Porsche and Kia’s offerings apart is their cost. Though Kia hasn’t confirmed pricing for the CV, you can bet all the fast-chargers in the world it’s going to be significantly less than a Taycan, even if it is the jewel in Kia’s EV crown.

Slowly moving Stateside — Like so many of its rivals, Kia’s promising a serious shift from internal combustion models to electric ones, and expects to have 11 EVs on its books by 2025. But unless there’s a major shift in its U.S. strategy in the next year or two, don’t expect to see too many of them here. According to Electrek, Kia only sold 2,000 EVs in the U.S. last year and it only offers them in the 13 states that adhere to California’s emissions standards.

You’re going to need a fast charger — Moreover, for 800V systems to work, the availability of 300 kW rapid chargers is going to have to increase, too. But with GM expected to add 800V support to its forthcoming electric Hummer, that’s sure to happen. It’s just a matter of when.

Faster charging could mean faster uptake — The ability to top up an EV speedily remains one of the key reasons reluctant consumers cite when asked if they’d consider an electric ride over a gas-guzzling one. That despite the fact that some EVs offer range well over 300 miles, and even Los Angelenos don’t tend to do that in a day. If Kia can address that worry while also offering an attractive and affordable vehicle it deserves to sell a ton of them.