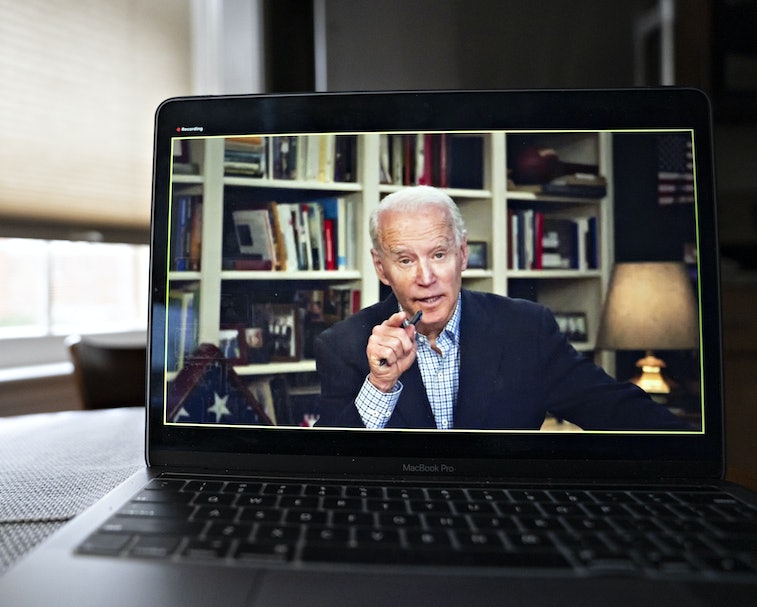 Facebook, Google, and Twitter might have different approaches to how they handle political advertising on their platforms, but they've been uncharacteristically united when it comes to coronavirus-related ones. IIn an effort to combat misinformation in recent weeks, all three have taken hard line stances on any ads using COVID-19 as a hook. Google, for instance, banned coronavirus ads from anyone deemed to be capitalizing off the pandemic, particularly those selling face masks and disinfectant supplies. As is often the case with blanket policies, though, the move is having unintended consequences for political advertisers.

Now, as politicians on both sides of the aisle try to push digital ads that use the coronavirus as a new platform issue, they’re running into a brick wall, Protocol reports. Though this is a bipartisan complaint, Democratic campaigns like Joe Biden's are especially concerned the White House and Centers for Disease Control can circumvent the ban as the only legitimate information sources on the pandemic allowed on the platform, inadvertently favoring the incumbent administration in the process.

When coronavirus and political ads collide — In the past six months, Facebook, Twitter, and Google have been forced to reckon with how they handle the advertisements that are the lifeblood of their respective businesses. When it comes to political ads, Facebook famously continued to allow them without fact-checking, while Twitter has banned them altogether. Google's taken a position somewhere in the middle, allowing the ads as long as the information within them is accurate.

As COVID-19 began to spread, Facebook started aggressively fact-checking posts before outright banning ads peddling fake cures. The company went so hard, in fact, it accidentally blocked legitimate coronavirus news a couple of weeks ago. Google, Amazon, and other companies have taken similar approaches to limit the reach of pandemic opportunists. In Google’s case, the reach goes much further.

"We are currently blocking ads related to coronavirus under our sensitive events policy, with exception of government PSAs on important health information," reads a statement to Protocol from a Google spokesperson. "This policy applies to all advertisers equally, including all political advertisers."

Facebook vs. Google vs. Coronavirus — While TV is still a beloved medium for politicians, Facebook and Google are slated to surpass its ad revenue this year. With the economy in shambles, digital ad dollars are going further than ever, with political ad buys per thousand impressions down to $10–13 from $20–30. Despite being able to buy more ads than usual, they’re not converting into clicks as an anxious public focuses on the pandemic fallout.

With Twitter out of the political game, the digital advertising duopoly of Google and Facebook was dominating political ad spend. Google doesn’t use the extreme microtargeting that opens the door to the false claims in some Facebook ads, but if politicians can’t talk about the defining issue of our time on Google, Facebook becomes the only option.

More like this
Chris Stokel-Walker
6.13.2022 8:18 PM
Chronic illness
COVID long haulers are sharing their realities on TikTok
Jackson Chen
6.20.2022 7:45 PM
Tech
U.S. joins Europe in pushing Apple to make USB-C charging switch
Andrew Paul
6.15.2022 4:33 PM
Ginsbot
No one asked for a Ruth Bader Ginsburg chatbot, but now we have one