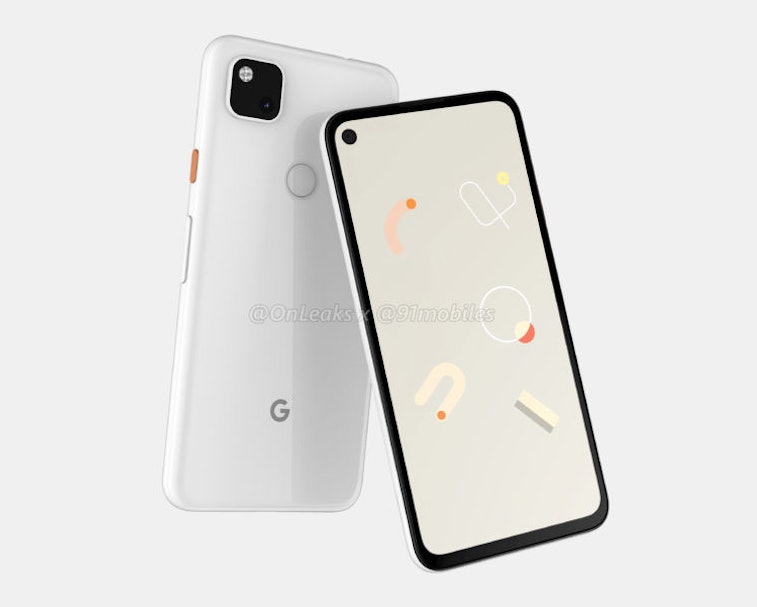 The Pixel 4 didn't live up to expectations, but Google's next Android phone, the budget-priced Pixel 4a, might when it's reportedly announced at next year's Google I/O. From @OnLeaks and 91Mobiles comes a first look at what the Pixel 3a successor might look like. High-res renders suggest the Pixel 4a will have a hole punch selfie camera in the upper left of the display, a single rear camera, a fingerprint reader on the backside, and a headphone jack — all things the Pixel 4 doesn't have.

Mid-range specs and pricing — Like the Pixel 3a, the Pixel 4a isn't expected to come with flagship specs. 91Mobiles says the phone will have a 5.7- or 5.8-inch display, could be powered by a Snapdragon 730 or 765 series chip, and come with at least 4GB of RAM and 64GB of storage; 5G is a maybe.

Mid-range specs might not be sexy, but the pricing — if it's as low as the Pixel 3a's $399 starting price — could make it a very attractive buy. Google doesn't release unit sales data, but it did say the Pixel 3a helped double fledgling Pixel sales after it launched last spring.

More than meets the eye — The rear camera will likely come with 12.2 megapixels; the camera bump reportedly has other camera sensors, but it's unclear what those might be (perhaps, a Time of Flight sensor for depth mapping and AR?).

Cutting down on costs — If the Pixel 3a is any indication, you should expect the Pixel 4a to also be made of plastic instead of metal. While it won't feel as premium in the hand, it probably won't matter if you're going to cover it with a case, anyway.

Besides using plastic, Google might cut costs once again by not including wireless charging. It's also highly likely the Soli radar technology inside of the Pixel 4 that enables features like the face unlock and gesture controls won't make it to the Pixel 4a — there's simply no room to fit the sensor inside of the hole punch.