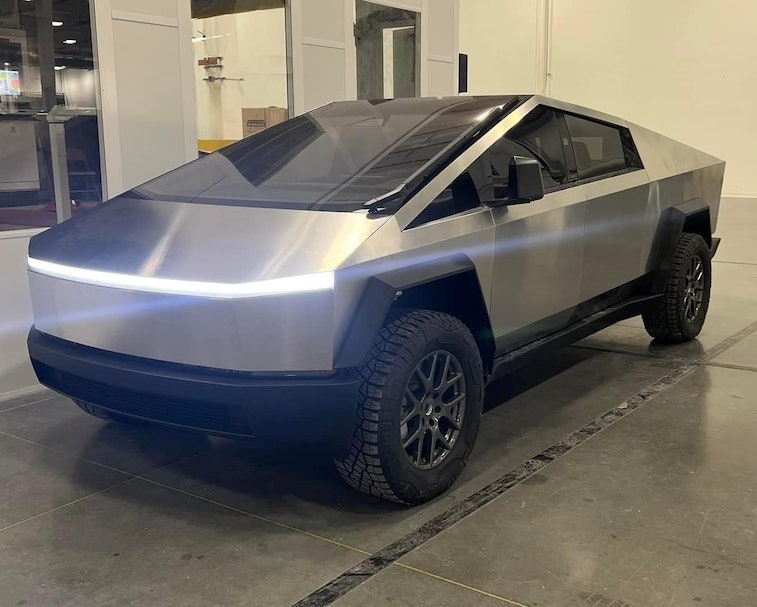 There’s a very good chance Tesla’s Cybertruck will not roll into customers’ driveways this year, but we now have some evidence the company is at least working on the vehicle. Newly leaked photos show off a slightly different Cybertruck design than the one first revealed in 2019, including a distinct lack of door handles.

The photos were posted to the Cybertruck Owners Club forum (that’s a real internet destination, somehow) Sunday evening, Electrek reports. The Cybertruck we’re seeing here shares many features with the original concept model — especially that now-infamous angular, blocky body — along with some additions that make this one much more road-ready. The Cybertruck’s windshield wiper is visible for the first time here, for example. The wiper is impressively long, as you might hope for a windshield as enormous as the Cybertruck’s. Some on the Owners Club forum speculate that the single wiper will retract and extend.

Though our instincts keep telling us otherwise, these photos do make it seem like Tesla is making actual progress on a road-ready Cybertruck.

An actual vehicle — The photos, which appear to have been taken inside a Tesla facility, with some employees pictured, show a Cybertruck so similar to the original that only a discerning eye will catch the differences. Luckily the Tesla fanboys over at the Cybertruck Owners Club forum are quite discerning indeed.

The wheels of this Cybertruck are significantly less chunky-looking than those presented on the Tesla stage and are actually quite similar to what you’d expect from Tesla’s other offerings. Some forum-goers speculate that the plastic covers seen in the stage prototype will return in some form, similar to the optional ones available for the Model 3.

The photos also give us a good look at the Cybertruck’s side mirrors for the first time. They’re, uh, pretty ugly. Electrek notes that Tesla hopes to ship the Cybertruck with side-view cameras that would allow the user to remove those mirrors, but that design is technically illegal right now.

Also of note: The door handles are gone. Elon Musk has said the Cybertruck will “recognize you” and open automatically. That seems to have made the jump to the current design.

Coming soon? — Though changes have certainly been made here and there on this design, the overall Cybertruck design is very much the same. So much so that the average onlooker might not even see a difference. For Tesla’s dedicated Cybertruck fanbase — of which there is apparently enough to make an “owners’ club” forum before the vehicle even releases — that’s good news indeed.

More importantly, the general road-readniness of this Cybertruck points to a more imminent release than we originally thought. Tesla’s production estimates for the Cybertruck have varied greatly since its first announcement, making it exceedingly difficult to guess when, exactly, it’ll make its real debut. This one’s basically ready to go, it seems.