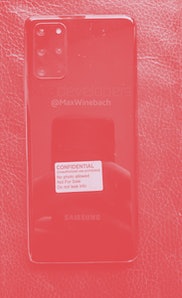 It looks like we can stop calling Samsung's next flagship Android phone the Galaxy S11. Corroborating earlier leaks, XDA TV host and writer Max Weinbach says the Galaxy S10's successor will indeed be called the "Galaxy S20" when it's announced at Unpacked on February 11.

More leaked pics — In addition to the name confirmation, Weinbach also shared several images of the "S20+ 5G" model, and wouldn't you know it, there's a screen with a center-aligned hole punch and a big camera bump on the rear with what appear to be five cameras.

Additionally, the screen will reportedly feel flatter and less curved on the edges thanks to a 2.5D glass. Weinbach says the backside glass will still essentially be a "waterfall" in that it curves more aggressively into the metal rail, but the screen won't as much. I like this.

MySmartPrice and leaker Ishan Agarwal have more details on the S20. New details include: the S20 will have a 6.2-inch AMOLED display, 12-megapixel main camera, 10-megapixel selfie camera, and 4,000 mAh battery.

As for the S20+, MySmartPrice says it'll have a 6.7-inch AMOLED display and the same front and rear cameras as the S20.

The S20 Ultra will reportedly sport the beefiest camera system of them all with a 108-megapixel main camera and a periscope telephoto lens with hybrid 100x zoom. I think my mouth just dropped to the floor.