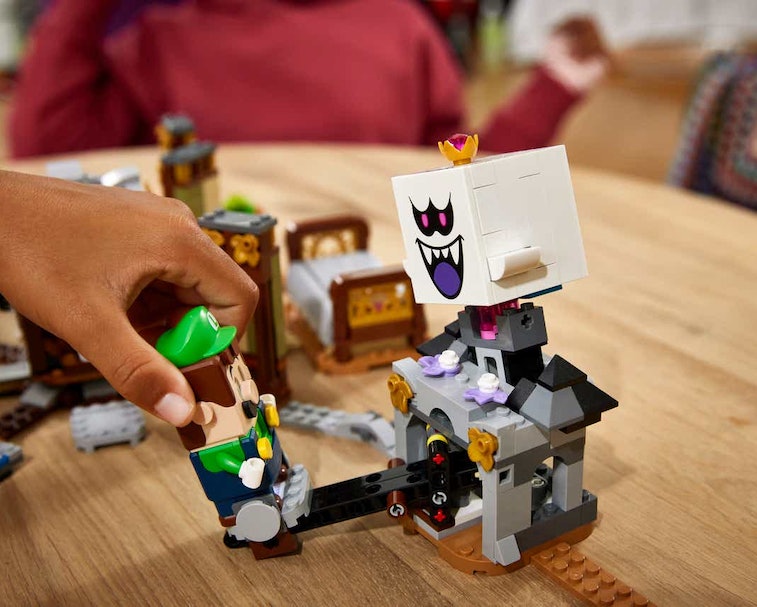 Nintendo and Lego make some heavenly collaborations when they team up, but those projects also have a pretty glaring blind spot. They’re all focused on Mario, with his brother Luigi paid absolute dust. Even Luigi’s part of the main Super Mario Lego set wasn’t announced until more than a month after details of the set were released.

Now it’s the green plumber’s turn to take the stage. A handful of new Luigi’s Mansion-themed sets will put Luigi front and center, right where he belongs. All three sets will be released on January 1, 2022 — not exactly the perfect holiday gift, but something to look forward to in the new year nonetheless.

There’s only one catch here, and it’s a pretty significant one. The Luigi figurine isn’t actually included in any of these sets. They’re more focused on settings and accessories to fill out Luigi’s world. You’ll need to pick up a $59.99 “starter pack” to actually place Luigi in those scenes.

Enter the mansion — Lego has announced three separate sets to bring Luigi’s haunted mansion into your Lego universe. Each includes some sort of interactive element, with players aiming to collect as many coins as possible.

The least expensive of the expansions, called the “LEGO Super Mario Luigi’s Mansion Lab and Poltergust Expansion Set” (a mouthful, that), retails for $24.99. That set includes Luigi’s Poltergust — the vacuum he uses to catch ghosts in the Luigi’s Mansion series. Pressing a small button on the Poltergust catches a Gold Ghost, allowing the user to “collect a coin reward from the machine in the lab.”

The Entryway Expansion Set ($39.99), meanwhile, presents users with a challenge. They’ll need to maneuver through the mansion and figure out how to defeat Bogmire, the purple ghost from the 3DS Luigi’s Mansion game. That set includes a Golden Bone for Polterpup and a Boo figure, too.

At $79.99, the Haunt-and-Seek Expansion Set is the largest of the sets. It includes all the right bricks to create a “gem-hunting, ghost-battling level” with rotating hallways.

An ever-expanding world — Many of Lego’s best sets cash in on nostalgia. This year’s Super Mario collection stands out even amongst those for its fresh take on interactive building blocks. These aren’t the inert Legos we came to know and love as kids. Well, they are, but when put together they also create playable levels — a digital/brick hybrid of sorts.

It’s definitely Lego’s most 21st-century set yet, and we’re glad to see the company is still expanding the Super Mario world it’s created. All three Luigi’s Mansion expansions will be available on January 1, 2022.