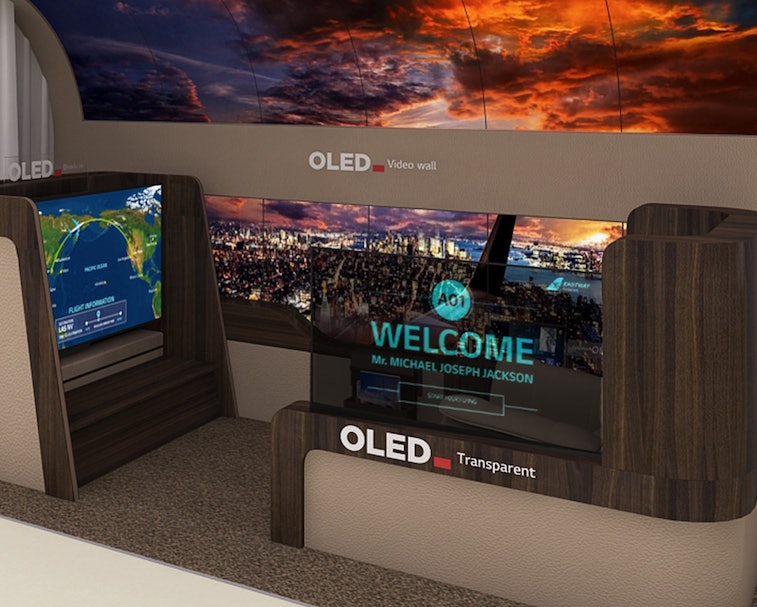 LG has unveiled new 55-inch flexible OLED displays it envisions will someday blanket the inside of airplane cabins. These displays could show things like clouds or some other peaceful scene during a flight — or probably advertisements if we’re being honest.

LG last year demonstrated ultra-thin OLED displays that can be rolled up, with the idea that you can easily store your massive TV away when it’s not in use. The newest iteration of that idea, also unveiled today, is a model that mounts to your ceiling and rolls down like a projector screen. But the company delayed production and hasn’t actually begun selling any such flexible displays yet. The technology uses existing OLED technology but replaces the typical glass screen with a plastic film, hence the bendability.

Elevate your in-flight viewing experience — The in-flight concept LG is demonstrating today is supposed to give the world a sense of how flexible TVs might be useful in settings beyond the home. Besides screens along an airplane’s cabin walls, first-class passengers would have their own 65-inch bendable OLED displays that could be adjusted for any viewing experience, like playing video games or watching movies. You could also bend the display to hide what you’re viewing from nosy seatmates. Another 55-inch variant would feature transparency technology and be used as a partition between passengers.

Of course with displays at those sizes, they’re going to be reserved for only the most expensive seats.

Originally slated for release in 2019, LG has said its first rollable TV may see a release in South Korea by the end of 2020, but it’s not a guarantee. And considering the speed at which airlines add new technology, I’m not expecting too much on that front in the near term. The photos LG has shown off with this latest announcement are only mock-ups but maybe the company will have more to share at CES.

More like this
Samuel Polay
6.15.2022 2:00 PM
Father's Day
The 6 best soundbars under $300 to get your dad for Father’s Day
Andrew Paul
20 hours ago
Powerplay
Tesla Powerwall owners will soon get paid to be energy mules
Jackson Chen
16 hours ago
Tech
This open-frame case lets you build a beastly portable PC