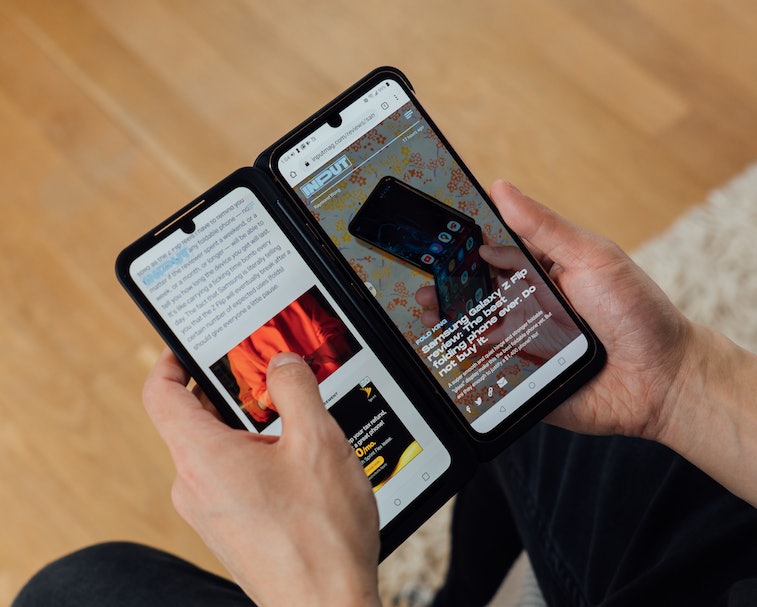 While Samsung and Motorola bend over backward trying to sell their novel Galaxy Z Flip and Razr phones, LG's answer is a bit more practical and durable: the V60 ThinQ 5G Dual Screen.

I tried the Dual Screen setup with the G8X ThinQ last fall and while it's useful for multitasking and gaming (like a Nintendo 3DS, but with a touchscreen gamepad on the bottom screen), the way you launch apps on it was clunky.

More Dual Screen app support — The most notable thing about the Dual Screen for the V60 ThinQ is that LG has optimized all of Google's core apps to work with it in widescreen mode. Previously, Google apps only loaded in portrait mode.

Still has a headphone jack — The V60 ThinQ is no Samsung Galaxy S20 Ultra. There's no telephoto camera with crazy 100x zoom and the 6.8-inch FHD+ P-OLED display doesn't have a fast 120Hz refresh rate, but it does have a headphone jack, 8GB of RAM which is rare in 2020.

Otherwise, the V60 ThinQ's specs are pretty standard for a 2020 flagship: Snapdragon 865 chip, 8GB of RAM, 128GB of storage (expandable via microSD card), and 5,000 mAh battery. The phone also supports 5G (in case you didn't already get that from its name). Embedded in the screen is an in-display fingerprint reader.

8K video recording — The main camera is a 64-megapixel shooter with f/1.8 aperture and pixel-binning for sharper 16-megapixel photos; the camera can also record 8K video at 24 fps. Next to it is a 13-megapixel ultra-wide lens with f/1.9 aperture and a small time of flight depth camera sensor.

On the front of the phone, in its small U-shaped notch, is a 10-megapixel selfie camera with f/1.9 aperture.

How much and when can you buy? — LG hasn't shared pricing for the V60 ThinQ and Dual Screen accessory and we only know that the two devices will be available in the "coming weeks." AT&T, T-mobile, U.S. Cellular, and Verizon will all carry the V60 ThinQ.

Gimmick or not? — I spent about an hour playing with the V60 ThinQ and I can say it's marginally better than the G8X ThinQ with Dual Screen. It's a very large phone for sure.

LG says it's improved the software for opening and moving apps between the V60 ThinQ's screen and the Dual Screen accessory, but I still found it somewhat confusing. For example, opening the touchscreen gamepad requires you to open it on the Dual Screen's display for it to show up on the V60 ThinQ's screen. Doesn't it make more sense for the app to show up on the screen it's opened on?

An hour wasn't enough to get a solid feel for the phone and its features. I'll have to wait until I can get a review unit in. But if you're bearish on foldable phones, but still want to have more screen to use, the V60 ThinQ could be a potential alternative.