LG will show off more ultra-light laptops at CES 2020 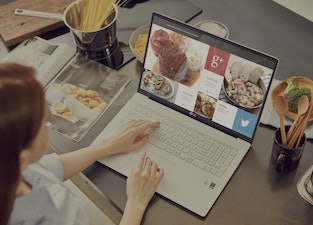 The weight, in pounds, of LG's upcoming 14-inch Gram laptop.

CES 2020 is around the corner and LG has pre-announced new versions of its ultra-light LG Gram laptops. The refreshed Windows laptops will come in 14-, 15-, and 17-inch models — all with 10-generation Intel processors. There's also a special 2-in-1 version of the 14-inch version.

Feather-light — Unlike other laptops that weigh the same, LG's Gram laptops are known for being extremely light thanks to the materials used. Like so light you question whether there's anything inside. These new ones should be no different. The 14-inch weighs 2.2 pounds, the 15-inch is 2.47 pounds, and the 17-incher clocks in at 2.98 pounds. Apple's 13-inch MacBook Air has a smaller display and weighs more than the 14- and 15-inch Grams and nearly as much as the 17-inch.

Power under the hood — Besides the new Intel chips, the new Gram laptops have Intel Iris Plus Graphics and Intel UHD Graphics (the 2-in-1 model only has the latter). RAM is configurable up to 24GB (16GB on the 2-in-1) and each system has dual M.2 SSD slots (the same removable storage found in Microsoft's Surface Laptop 3).

Lots of ports — The Grams have one Thunderbolt 3 USB-C, two (14-inch) or three (15- and 17-inch) USB-C 3.1, HDMI, microSD slot, and a headphone jack. No USB-A ports so you're going to need a dongle if you haven't switched completely to USB-C. There's also a built-in fingerprint reader and Wi-Fi 6 support.