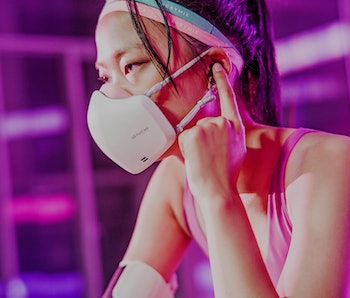 Last year, LG created a very dystopian-looking air purifier mask that had us all ready to turn into Batman villains. Now the company has announced an updated version of the PuriCare Wearable Air Purifier that does — thankfully — remove the side plates that made the original design so bulky.

The new mask, which is first launching only in Thailand, uses a more efficient motor than the original PuriCare model; it’s smaller, too, which has allowed LG to reduce the product’s overall footprint. It utilizes the same dual-fan tech as the original mask, too, which LG says allows the mask to control airflow automatically by “sensing the user’s breathing patterns to make breathing easier and more natural.”

As much as we’d like to believe otherwise, the COVID-19 pandemic is still very much ongoing. The tech industry is, of course, taking that opportunity to pump out as many flashy products skewed toward personal and public health as possible. We wish high-tech masks were a passing fad of the 2020 variety, but it’s pretty clear they’re here for the long haul.

Now your friends can hear you, too — Besides the much smaller facial footprint — it does look much more like a regular mask than a torture device, now — the new PuriCare’s biggest upgrade is the addition of a microphone and speaker system. Both use LG’s VoiceON technology to automatically recognize when you’re talking and amplify your voice through the built-in speaker.

This is a significant quality-of-life upgrade. LG says the new sound system hit a 0.75 (Excellent) on the Korea Electronics Technology Institute’s Sound Transmission Index — which means you should theoretically be able to hold a full conversation without taking the mask off. That alone could make the newer version worth the price of upgrading for existing customers.

Guess this is the new normal — It’s quickly becoming evident that we’ll be carrying our masks around for the foreseeable future. In most instances, a plain-old cloth mask or N-95 will do the trick, but there’s certainly a market for masks with all possible bells and whistles, too.

LG is targeting a very specific crowd with the PuriCare mask: athletes. The company’s news briefing centers on this audience and the Thai Olympic team even wore them for a photo opp on their way to this year’s Olympics. Though I’m not an athlete myself, I have to wonder whether or not it would actually be comfortable to wear the PuriCare for hours at a time, as the company claims.

It’s also notable that LG doesn’t actually mention COVID-19 anywhere in its announcement. Most air purifiers are able to target particles of the sort we need to worry about these days, but LG likely can’t say so without first conducting extensive studies.

The new PuriCare Wearable Air Purifier launches soon in Thailand, but there’s no word yet on whether or not it will see a worldwide release.