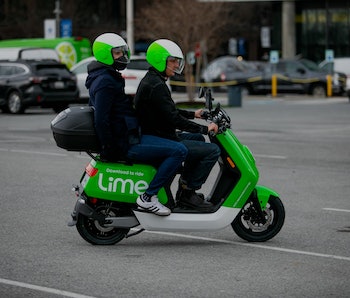 Lime, the company behind those infamous green, dockless e-scooters, is launching its electric moped service in New York City beginning on Friday, April 30. New York will be the third city to which Lime brings its all-electric mopeds, following launches in Washington, D.C., and Paris earlier this year.

“As New York emerges from a difficult year, we’re eager to support an economic comeback driven not by cars, but by sustainable options that reduce congestion, allow for open-air, socially-distanced travel and complement the cities subways and buses,” Lime CEO Wayne Ting said in a press release.

Lime has vowed from the get-go that safety will be of the utmost importance in launching its line of e-mopeds around the world. The company — through no fault of its own — is working against the bad taste left in many people's mouths by Revel’s deadly e-moped pilot program. Lime is taking every possible precaution to keep riders safe while allowing for the freedom of a quick-on-quick-off rental system.

Safety first — Lime’s electric mopeds can be rented for short periods of time whenever you’re ready to ride — if you’ve taken the necessary precautions, that is.

First, you’ll have to scan your driver’s license and your face to prove you’re legally cleared to take to the streets. Lime’s “live likeness test” uses artificial intelligence to check whether or not you are who you say you are. (In the U.S., you need to be 21 to rent one of the e-mopeds; in Paris, you need to be 18.) There’s a similarly complex infrared sensor system in place for ensuring you wear your provided helmet throughout your ride.

Lime has also teamed up with the Motorcycle Safety Foundation (MSF) to create an introductory safety video and a test that must be completed before beginning your first ride. There’s a deeper guide available in the Lime app, too, complete with tips and exercises to prepare you for any traffic situation.

A carbon-free empire — Lime has come a long way in the last year-and-a-half. The company pulled its e-scooter service from 12 markets last January due to financial constraints and laid off 14 percent of its staff, too.

This year has been much better for Lime; the company is now well on its way to creating a global electric transportation empire. Lime’s second-gen e-bikes are rolling out to 25 new cities this year, and 1,000 of its e-scooters are coming to the Bronx early this summer. The company has even started a program to turn its old e-bike batteries into portable speakers.

Lime’s expansion is great news for green transportation — these mopeds can take you all around NYC and back, with up to 87 miles of travel on a single charge — and hopefully a step to reducing congestion. If you’re interested in trying out Lime’s e-mopeds for yourself, the company is offering riders their first 15 minutes free to get acclimated and walk through a few exercises.