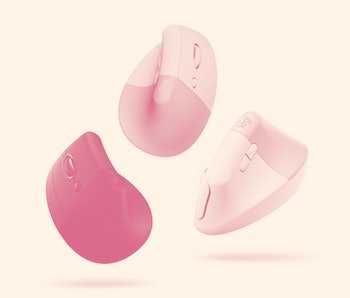 Most of us are glued to a desk for at least eight hours a day, so you may as well make sure your hands are comfortable during those long stretches in front of a screen. That’s where vertical mice like Logitech’s newly announced Lift come in.

Logitech has previously dabbled with vertical mice with its MX Vertical mouse, which is designed to reduce strain on your wrist by keeping it in a “natural handshake position.” But, one of the main complaints with the MX Vertical was that it wasn’t comfortable unless you had large hands.

The perfect angle — Enter the Lift, which is set at a 57-degree angle to lean your hand into that handshake posture like the MX Vertical. Given its vertical orientation, it’s a lot higher than traditional mice at 2.8 inches tall, but shorter than its predecessor.

For those of us who still use traditional mice, it may seem funky to adjust to a vertical mouse, but the build is essentially the same and takes only a little time to adapt. Besides the obvious left and right click buttons, the Lift has back and forward buttons, a middle button and a scroll wheel that can click down. Logitech said the Lift can be glided around smoothly and has a quiet scroll wheel and buttons. You can further adjust the Lift’s DPI, which ranges from 400 to 4,000 DPI, in increments of 100.

The Lift works within a 10-meter range via Bluetooth and features a button on the bottom of the mouse that lets you switch between three devices. Logitech includes an AA battery with the mouse, which is a departure from the MX Vertical and its USB-C charging. Don’t worry about longevity, though, Logitech says the Lift can run for two years on just a single battery.

Left-handed love — Logitech doesn’t want to leave anyone behind with this mouse since it’s also available in left-handed and right-handed configurations, and in pink, off-white and black colorways. The Lift retails for $70 and is available on the Logitech website and other retailers.

Of course, if you’re still not convinced enough to go vertical, Logitech incorporates ergonomics into many of its traditional mice. There’s the MX Master 3 that Input’s deputy editor Ray Wong considers the “best mouse on the planet,” but also the MX Ergo, though this one still has the option to go up to a 20-degree tilt.