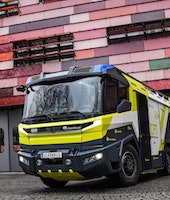 The cost of the CFT, which will be deployed to Station 82 in LA.

On Monday, the Los Angeles Fire Department (LAFD) announced the purchase of its first electric fire truck. The vehicle is based on the Rosenbauer Concept Fire Truck (CFT) which the department got to test last fall. The LAFD expects to have a customized version in 2021 which will make it the first of its kind in North America. The truck will likely be assigned to Station 82, which serves some of the densest parts of Hollywood and the narrow, brushfire-prone streets of the Hollywood Hills.

The truck — The European, two-battery truck can run for up to two hours and a rapid charging station would be installed to keep it ready to go. The truck will also include a backup diesel generator for longer trips or bigger jobs.

Believe it or not, $1.2 million for the CFT is comparable to what the department pays for a standard diesel gasoline-powered aerial ladder truck, according to the Los Angeles Times. Initial reports on the CFT’s American test cited a price tag of about $6 million, though the company clearly was able to reduce costs significantly.

Using base specs for the CFT and one of the LAFD’s ladder trucks, the CFT pumps out 750 gallons of water per minute though existing diesel ladder trucks can double that output. However, when you factor in the small street-friendliness and maneuverability of the CFT, the purchase is a no-brainer.

Why Hollywood? — Station 82 sits at the edge of Hollywood, near the base of the Beachwood Canyon area of the Hollywood Hills (where the Hollywood sign is). This area — and the Hills in general — are prime locations for brushfires. The narrow, winding streets are difficult to climb for larger trucks. Even on the flatter grid, side streets aren’t much wider and traffic is omnipresent. The CFT is so lean and easy to drive, LAFD Chief Ralph Terrazas was doing donuts in it at Dodgers Stadium.

This historic purchase marks an important move away from just personal electric vehicles. Forward-looking companies have set their sights on fully electric airplanes and air taxis. Public transit agencies around the U.S. have been transitioning to electric systems for years, and the rise of the shared e-scooter cannot be tamed. As the public service sector gets behind electric-powered vehicles, a whole new slew of companies like Rosenbauer are sure to blossom, bid, and win business from the incumbents.