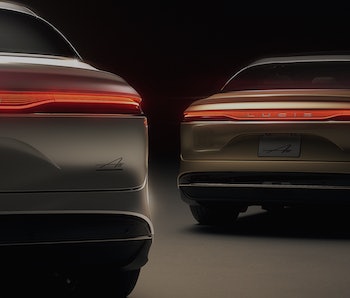 Electric vehicle upstart Lucid Motors expects to start deliveries of its Air Dream Edition by the end of this year, but it’s telling buyers that the car isn’t going to be exactly as promised. Instead of one vehicle that features both 1,000 horsepower and 500 miles of range, buyers will have to pick one.

The company has faced delays releasing its first car due to global supply chain problems impacting the automotive industry, but it reaffirmed that deliveries of the Air will begin by the end of the year. The Air is a luxury sedan that will rival the likes of the Tesla Model S Plaid and the Mercedes EQS.

Bifurcation — The first version of the Air Dream Edition listed specifications of 503 miles on a single charge, 1,080 horsepower, and 0-60 mph acceleration times of 2.5 seconds. Now instead, there will be one version that focuses on performance while the other maximizes range. The first one, the Dream Performance, will have 1,111 horsepower with roughly 475 miles on a charge, while the Dream Range will get 933 horsepower and range of roughly 517 miles.

Lucid says it will contact reservation holders to confirm their new choice.

Who cares? — The price of the Air Dream will remain the same at $169,000 for either variant, which may disappoint some customers who placed orders with the original spec sheet in mind. Lucid clearly realized it couldn’t achieve the combined performance and range, but only after selling the cars. But offering 500 miles of range in an electric car is an impressive feat that not even Tesla has accomplished. And if you think about it, the Lucid Air is a sedan — it’s a family car. While it’s cool to see a Tesla Model S accelerate super quickly, most of the time there’s no practical reason to need that type of power. Maybe in a sports car like Tesla’s Roadster, where one might reasonably take it to the track, but not a sedan. Honestly, 933 horsepower in the Dream Range is just insane.

Lucid is only going to produce 500 of the Air Dream sedans before it moves onto less expensive versions.