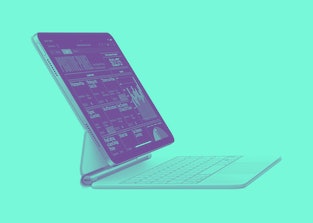 The cost of the new iPad Air with Apple's M1 chip

The iPad Air 5 just went from Apple’s awkward middle child to the tablet to get if raw performance is your main concern, thanks to the inclusion of the M1 chip at today’s Apple event.

Taking what used to be a headlining feature on the $799 iPad Pro from last year and offering in an equivalent (in all the ways that matter) tablet for $200 less.

Raw power — All versions of the new iPad Air 5 come with Apple’s M1 chip. Yes, the chipset was introduced in 2020 and will eventually be replaced by the rumored M2 this year. But reviewers struggled to find things to push last year’s M1-enabled iPad Pro to its limits.

Pro-level iPad apps and iPadOS have gotten better in fits and starts, but the story hasn’t changed for 2022. That’s more than enough power for anyone doing basic creative tasks, and now it’s yours for the starting price of $599.

Better bundle — The lower price means you can get the ideal iPad package with Magic Keyboard and 2nd-generation Apple Pencil in tow for $1,027. Still a ridiculous price for a tablet, but an easier pill to swallow than the same deal on an 11-inch iPad Pro for $1,277.

The iPad Air 5 is smaller than the 11-inch Pro at 10.9 inches and its base storage of 64GB is definitely annoying to deal with, but I think it's absolutely worth considering. Apple has upset the math of its iPad line in a way that should be taken advantage of.

Apple has upset the math of its iPad line in a way that should be taken advantage of.

I’m more confident the new M1 iPad Air is a good deal than I am iPadOS 16 and a new iPad Pro will add anything really worth getting FOMO over. I’m excited to be proven wrong, but for now, the new iPad Air 5 seems like a great deal and an even better tablet.