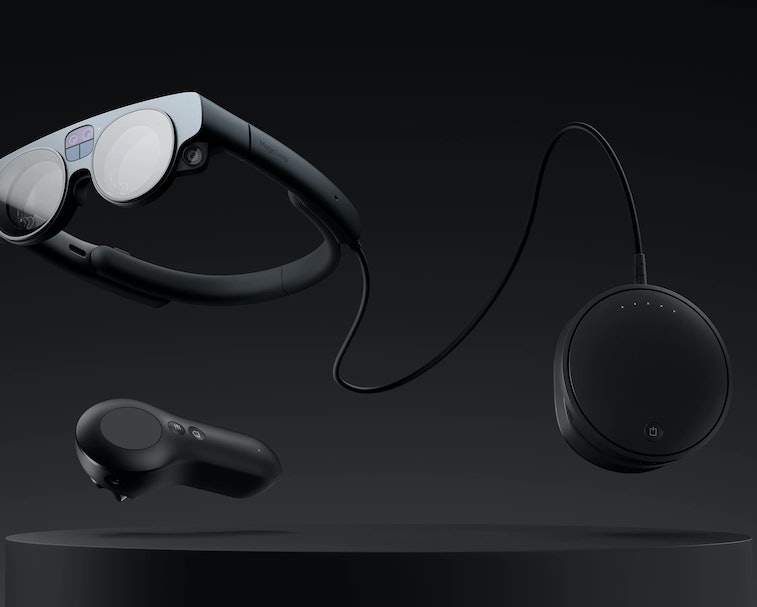 After a fairly disappointing first release, Magic Leap is going to launch its second AR headset that’s solely meant for enterprise use. The Magic Leap 2 headset is a lot slimmer and less bug-eyed than its predecessor, but it still keeps the puck-style attachment that holds the brains of the headset. This time, Magic Leap is going for a shoulder strap design for the puck, giving it a more modern look than the clip-on style of the Magic Leap 1.

If you don’t remember, the Magic Leap 1 was more hype than hit, bringing in mediocre sales. The company later pivoted away from consumer products and layed off staff. Magic Leap is in dire need of a rebound, and it seems like Magic Leap 2 could be exactly that.

There’s really only a few solid AR headset choices out there, like the Google Glass or Microsoft’s HoloLens 2. Unlike these two options, Magic Leap’s formula is based around offering high-end specs by offloading the bulk onto an accessory. We saw it first with the Magic Leap 1, but Motorola also proposed a similar solution in the form of a 5G necklace. While not being tethered has it benefits, Magic Leap 2’s puck attached via shoulder strap actually doesn’t feel too intrusive and offers a clean looking solution.

Improved specs — Magic Leap is upgrading its second headset with a much larger field of view at 70 degrees. Each of the Magic Leap 2’s lens has a resolution of 1,440 x 1,760 with a fast 120Hz refresh rate.

The Magic Leap 2 has an AMD 7nm Quad-core Zen2 X86 core CPU and a AMD GFX10.2 GPU in its puck, called the Compute Pack. The AR headset itself offers a quite a few sensors, including an accelerometer, gyroscope, altimeter and more.

The upcoming AR headset also has a new dynamic dimming feature that can adjust brightness so it can be better used in brightly-lit environments. According to Magic Leap, the headset will last about three hours in continuous use, but seven hours in sleep mode.

The Magic Leap 2 will be available September 30 in the U.S., U.K., Germany, France, Italy, Spain and Saudi Arabia. The AR headset is expected to be available in Japan and Singapore before the end of the year.

More like this
Jackson Chen
8.8.2022 7:13 PM
Tech
Samsung is offering NFTs that actually do something with its next foldables
Jackson Chen
8.5.2022 4:17 PM
Alexa, Where's My Roomba?
Amazon buys Roomba, inching toward smart home hegemony
Ian Carlos Campbell
8.18.2022 7:18 PM
Land of Forgotten Toys
Snap may be a camera company, but only its software sells