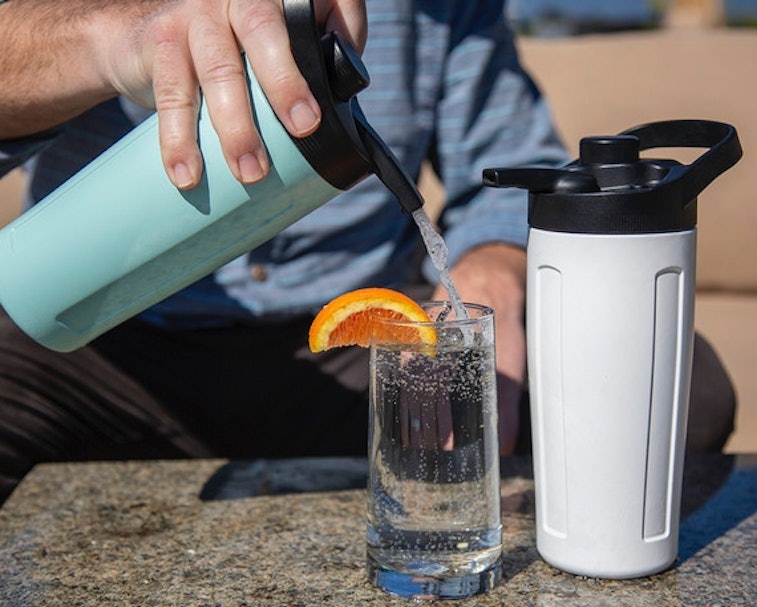 With summer rapidly approaching and outdoor locales still very much dominating our hangout choices, ice cold beverages are a must. And not just any beverages — we want something to take the edge off reality for a little while, too.

Portland-based GrowlerWerks has us covered. The beverage-device company’s latest invention is the uKeg Twist, an on-demand hard seltzer maker that’ll make you forget all about the White Claw at the back of your fridge.

Using the uKeg is as easy as choosing a flavor profile, filling it up with some cold water and vodka, and shaking the bottle for 30 seconds. It’s a lot like using a SodaStream, but the uKeg’s carbonization process can be completed anywhere, no electricity required.

Enjoy without the waste — Hard seltzer is one of the most popular drinks at the liquor store right now, with everyone from Bud Light to Travis Scott dipping their toes in the burgeoning market. The GrowlerWerks crew saw this trend and saw an opportunity for technology to better the hard seltzer experience. It’s one of the simplest drinks to make at home, after all.

Traditional seltzer machines are meant to sit out on your counter, though, and GrowlerWerks wanted something you could just as easily bring to a park picnic. They also knew it would be easier to keep hard seltzer free of extra sugars if they made the drinks themselves — and that it would cut down on all those empty cans, too. GrowlerWerks says every part in the uKeg is replaceable, so it should last for years and years. And even those carbon-dioxide canisters are recyclable.

Thanks, Kickstarter — The uKeg Twist is GrowlerWerks’ third product. In just a few years the team has gone from working in a basement to operating out of a full warehouse, with features in notable magazines like Food & Wine and Esquire. Co-founder Brian Sonnichsen tells Core 77that the company’s success is in large part due to the ease with which its been able to raise funds and hype on Kickstarter.

“Before Kickstarter, there just wasn’t a way for a few guys like us to launch a product like the uKeg,” Sonnichsen says. “I don’t think we’d even have started it if there wasn’t some way to easily pre-sell the first production batch.”

The uKeg Twist comes in a 24-ounce size and a 36-ounce size, depending on how many people you’re planning to party with. The project has raised nearly $300K on Kickstarter as of today.