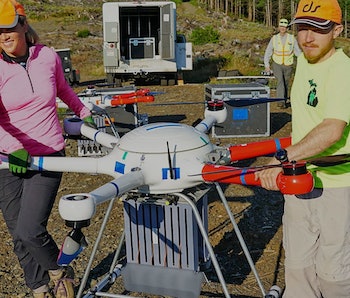 In case you forgot amid everything else that went up in flames this year, 2020 was the most devastating year for wildfires on record. While nature has its own processes for healing, these can take time... time the affected ecosystems don’t have. Over the years, humans have manually planted trees or scattered seeds from helicopters, but DroneSeed is splitting the difference. The seed-planting drone company is transforming the way we approach reforestation, according to CNN Business.

Not your average DJI drone — DroneSeed works with crafts that are more robust than the consumer-friendly models you’re used to. The eight-foot drones can carry up to 57 pounds of seeds and cover up to 50 acres. They fly in swarms of five and are reportedly six times faster than manual planting.

Based on trials in New Zealand and the state of Washington, the company claims it can plant about 140 trees per acre. In a year where more than 8 million acres were razed by wildfires, this kind of coverage and speed offers hope for the future of our forests.

DroneSeed employs LiDAR and wavelength sensors to map areas and determine where the most ideal soil is. The seed payloads are specially-crafted so they’re more likely to take than the random scattering from other aerial efforts. The proprietary seed vessels include fertilizers, pest deterrents, and are even spicy to prevent squirrels from eating them.

The company has received several firsts in terms of Federal Aviation Administration (FAA) exemptions. In 2018, it was the first only U.S. company allowed to use drone swarms and spray agricultural substances. In October, the FAA approved DroneSeed fleet to operate Beyond Visual Line of Sight (BVLOS), increasing the potential to plant as many trees as possible. The regulatory body also permitted an expansion to cover reforestation in California, Colorado, Montana, Nevada, Arizona, and New Mexico, according to a statement by DroneSeed.