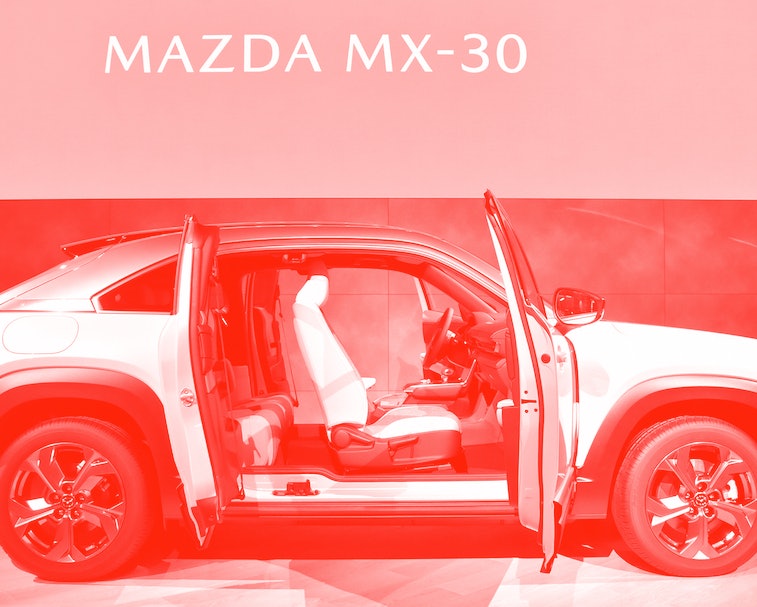 Japanese car company Mazda has committed one of the cardinal sins of consumer technology: it’s deliberately hamstrung the performance of one of its products. Specifically, it’s adjusted the torque produced by the forthcoming MX-30’s electric motor, making it more sluggish than it needs to be so it feels more like a gas-guzzler off the line than an EV.

It’s also cut the range — In an even more controversial move, the MX-30 will only have a 35kWh battery, which is less than half the capacity of the batteries found in most comparable EVs. That’s going to translate into a range of around 130 miles. Mazda claims that's more than sufficient for most European drivers, whose average daily mileage is around 35.

Even more contentiously, according to Autocar, Mazda says putting a much smaller battery in its EV makes it more CO2 efficient over its lifetime because a smaller battery means less weight to move, and less CO2 output in the battery's production. Sadly, though, it also means less range and more frequent recharging than you’d get from a bigger battery. If the claim is true it's a smart move from Mazda, but it's going to face an uphill battle convincing consumers.

Green credentials aside, half the fun of EVs is their fantastic acceleration when compared to combustion engines. Unless Mazda can convine would-be buyers curtailing the MX-30's performance is genuinely beneficial, it may prove to be a sales-limiting move.

Mazda mimicking Canon — The list of companies that have pulled similarly egregious tricks is extensive but, among them, camera maker Canon leaps to mind. The company is infamous for artificially limiting its mid-range camera’s hardware by omitting software features found on higher-end models, creating a whole community of people making firmware mods to get around the restrictions in the process.

Will we be able to hack an MX-30 to get the performance its hardware is capable of? Possibly. But we just know it’s going to ruin the warranty. For now, if we want suicide doors and the sort of acceleration we expect from an EV, we’ll be buying a BMW i3 instead.