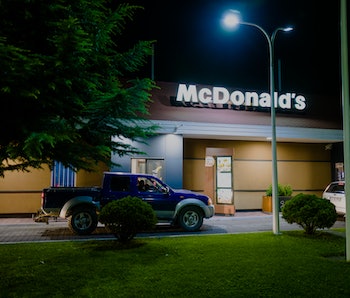 After testing out the technology over the summer in Chicago, McDonald’s is continuing its push towards AI-enabled drive-thru’s thanks to a new partnership with IBM, reports CNBC. Yesterday, the fast-food empire announced it “entered a strategic partnership” with the computing and artificial intelligence corporation that entails IBM acquiring (the incredibly named) McD Tech Labs. The latter was formerly known as Apprente prior to McDonald’s 2019 purchase of the company.

“In my mind, IBM is the ideal partner for McDonald’s given their expertise in building AI-powered customer care solutions and voice recognition,” McDonald’s CEO Chris Kempczinski told investors yesterday. The company’s summer trial run of voice-recognition software at drive-thru lanes reportedly was estimated to be roughly 85 percent accurate in interpreting customers' orders. Now, maybe we can finally get to the bottom of that whole ice cream machine scandal...

More automation, less jobs — Although McDonald’s execs swear this will streamline ordering experiences for both customers and employees... we all know where this is heading. Once AI can adequately handle human voice orders (which won’t take long, just ask Siri), it’s only a matter of time before the corporate “streamlining” begins to include fewer actual workers within restaurants, and more reliance on machines that don’t require a salary or healthcare.

Boldly going into the McFuture — It’s not all terrible decisions for the future from McDonald’s. Recently the fast-food behemoth announced it would begin testing out “McPlant” burgers in certain U.S. locations, and last month said it was researching ways to make Happy Meal toys less harmful to the environment. Of course, one of the easiest ways to do that would be to simply stop making the tiny plastic choking hazards altogether but we’ll just have to take what we can get right now.