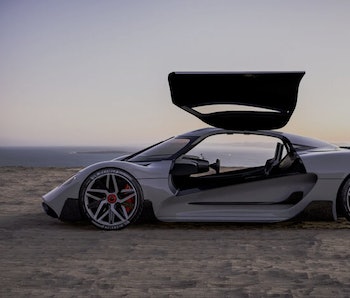 British startup Viritech plans on producing a zero-emissions hypercar by 2023. The vehicle, called the Apricale, is a two-door hydrogen vehicle. Its name comes from the Latin word “apricus,” meaning “touched by the sun.”

Intended for the sorts of people who buy Ferraris or Lamborghinis, the Apricale intended to showcase the advantages of a nascent alternative fuel-cell technology — in this case, hydrogen — but which is never intended to become a mass-market vehicle.

To that end, Viritech plans on producing just 25 units of the Apricale, which will use the company’s unique hydrogen fuel tank that it eventually wants to sell into industries like long-haul trucking and aerospace. So don’t expect it to be cheap.

Hydrogen innovation — There’s no word on the specifications of the Apricale, but Viritech says the car will be half the weight of its battery competitors. That’s due in part to its hydrogen tank design that’s made out of lightweight graphene and serves as a structural component of the vehicle’s chassis. Unlike other hydrogen cars where fuel tanks are bolted on, the Viritech uses its tanks as part of the vehicle’s frame itself.

The only other known hydrogen hypercar out there is the Hyperion XP-1, which is set to hit production next year promising speeds of 221mph and more than 1,000 miles on a tank. One hydrogen-powered car you can buy is the Toyota Mirai, which gets 402 miles on a charge. Hyperion and Veritech have simply thrown in larger tanks... and, you know, designed a far sexier exterior.

High efficiency — Hydrogen can store a lot more energy by volume than batteries, making it particularly suitable for industries like trucking where batteries would require frequent recharges. Batteries do make more sense for passenger cars, however, as hydrogen refueling stations are few and far between in the U.S.

Hydrogen is already in use in some places like warehouse facilities where retailers use it in forklifts that are zero-emissions and can quickly be refueled. General Motors is hoping to make new hydrogen-powered trucks after ditching Nikola for a new partner. Hydrogen is not totally zero-emissions yet, though, as the process of actually extracting it from water still often uses dirty fuel sources. But as renewable energy from solar and wind becomes more commonplace, it may well get there.

Viritech is currently working on reference designs for a heavy-haul truck called the Jovian and it recently moved into a new engineering facility in the British Midlands. The Jovian isn’t expected to be anywhere as good-looking as the Apricale, but you’re definitely more likely to eventually see one on the road.