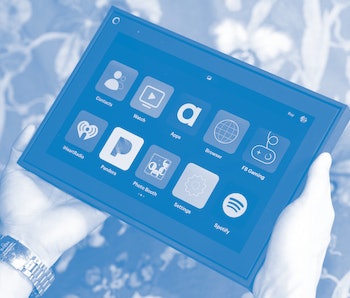 After just three and a half years of mediocre service, Meta’s Portal smart displays are getting ready to retreat from public view. Meta is planning to cease the production of consumer Portal products in the near future, pivoting instead to focus on business Portal products.

The change in strategy was first reported by The Information and was later confirmed to The Verge by a source familiar with the Portal team’s business. The extent to which Meta will continue to produce Portal products for business use is unclear; Meta hasn’t commented on the matter.

When Input deputy editor Ray Wong reviewed the 2019 edition of Facebook’s Portal, he worried that, despite how easy it was to have fun on video calls using the device, it had arrived ten years too late to really be useful. Subsequent Portal releases felt more timely with their release during the pandemic — but it seems our first impression may have been right after all.

Less than one percent — The reprioritization around Portal comes at a time when Meta is very much questioning all of its hardware choices. The Information points, for example, to a smartwatch project that’s been scrapped entirely. The company’s mixed-reality headset project is being scaled back, too.

Portal was never a novel idea, and its sales reflect that fact. IDC estimates that Meta shipped about 600,000 Portals in 2020 and 800,000 in 2021 — sales that together don’t even comprise one percent of the smart speaker and smart display market. Amazon’s Echo and Google’s Home comprise the vast majority of that market.

Gone and probably forgotten — Portal still exists for now. If for some reason you feel inclined to spend $349 on a 14” display that’s not all that smart, the Portal Plus can be yours via Meta’s online store. The Portal Go, which includes a rechargeable battery and a fabric exterior, is available for $199; the 10” Portal that looks like a photo frame is available for $179. The Portal TV setup is still out there, too, coming in at $149.

Here’s the thing about smart displays and speakers: there are plenty of them on the market. Don’t hold your breath for Portal eulogies; we’d be surprised if anyone even remembers Meta made smart displays in a few years.