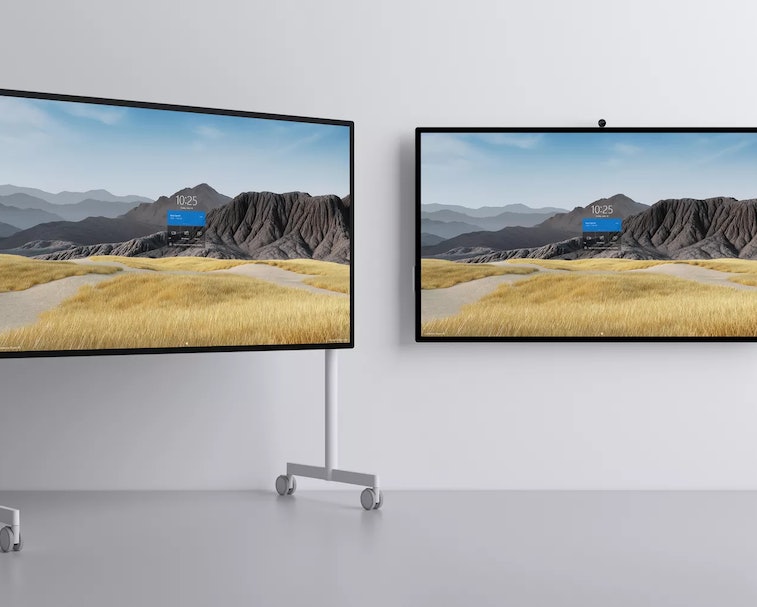 Microsoft's 85-inch Surface Hub 2S is going on sale at the worst possible time — or the best time, if you believe the company's spin on it. Pre-orders for the large collaboration screen began on Tuesday and it will begin shipping to customers in January 2021. The starting price for this beast of a Surface computer is $21,999.99.

Launching during a pandemic — With a large number of people working remotely today, it's initially hard to imagine that buying an expensive collaboration device like the Surface Hub would be a top priority for enterprises. Microsoft says they're actually great for helping bridge remote teams, however, as teachers and other leaders can easily run collaboration tools like digital whiteboards on the Surface Hub and share their screen to those participating remotely.

Just think about all those little boxes with children that have to fit on a teacher's computer screen and you start to get the idea of the potential usefulness during these unique times.

The Hub 2S is integrated with native Office apps like Word and Excel, so users can throw up pie charts or other material onto the whiteboard and draw in notes using a Surface Pen.

In terms of hardware specs, the Surface Hub 2S features an 8th-generation Intel Core i5 processor, 8GB of RAM, a 128GB SSD, and UGH graphics. It's locked down to a cart with wheels (included in the price thankfully, *cough* Apple *cough*) and intended purely for collaborative meetings — it's not a computing device — so these specs should be sufficient. A greater focus is placed on collaboration-specific details, like the array of far-field microphones, 4K camera, and an included Surface Pen that immediately connects when it touches the display.

Speaking to The Verge, Microsoft's corporate vice president of devices Robin Seiler said that the 85-inch model of the Surface Hub could help teams adhere to social distancing when they return under a hybrid model with reduced in-person staff. “One benefit to a larger screen that Hub provides is that it can help implement social distancing for people to stay six feet apart while working together.”

The optimistic take — In Microsoft's defense, companies do shell out a lot of money for collaboration equipment like Cisco videoconferencing systems that can easily hit the tens of thousands of dollars. So it's certainly not unheard of that they might be inclined to buy a Surface Hub, especially as some employees from large tech companies begin flocking to the suburbs with no plans of returning to the office. Microsoft has managed to create a name for itself designing beautiful hardware under the Surface line — much better than beige, old-school looking hardware from the likes of Cisco.

So maybe some of that money previously spent on office equipment and snacks will go to buying a Hub for managers who hold lots of meetings and will now need to adapt to making presentations to a fully-remote or hybrid workforce.

One criticism of the existing 50-inch Surface Hub 2S is that the device ran a custom "Windows 10 Teams" variant of Windows designed for bigger screens, but it didn't run apps outside Microsoft's suite. Now owners of that Surface Hub and the 85-inch model will be able to use a full version of Windows 10 and run whatever corporate software they'd like. There will also be new sign-in support for Windows Hello and a fingerprint reader.