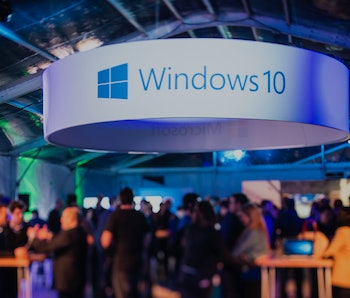 Apple used to be seen as the underdog while Microsoft was Big Brother, but the tables have turned. The latter company is taking a swipe at both Apple and Google with a new set of principles for its Windows 10 App Store that are meant to promote choice and innovation. Among them, Microsoft is letting developers accept payments without giving it a cut, and it will not block an app based on how its contents are delivered — streaming from the cloud is one example provided.

It's a stark contrast to Apple, which is under increasing scrutiny for the tight control it wields over iOS, where developers must pay it a commission on sales and follow a byzantine set of rules for their apps to be approved. Developers who refuse to comply risk being locked out of iPhones and iPads altogether, as users can't download apps outside the App Store.

Microsoft allows Windows users to download apps from the open web, but like Apple, says its official app store offers strong security that makes it an ideal place for developers to offer their apps.

Your move, Apple — Today's move is the latest in a series of jabs by Microsoft. It has come out strongly against Apple for punishing Epic Games over a revenue sharing dispute in Fortnite. Its own xCloud game streaming service has also been blocked from iOS because Apple thinks users would want each game to have its own App Store listing.

Microsoft says its principles can serve as a framework for other app stores, and they come just after House Democrats released an antitrust report concluding that major tech companies have grown into "the kinds of monopolies we last saw in the era of oil barons and railroad tycoons." Apple, Amazon, Google, and others are often referred to as toll booth operators because they collect taxes in the form of commissions from any new company that tries to succeed online, and make it hard to thrive otherwise.

Apple is notoriously bad about this. It goes so far as to demand companies with subscription businesses offer payments through their mobile apps so it can take a cut. If they try and push people to buy a subscription online instead, Apple will block their apps from the App Store.

Deja vu — Microsoft itself was once viewed as the bad guy for very similar reasons. It was sued by the Department of Justice in the 1990s for making it difficult to install alternatives to Internet Explorer on new Windows computers. It eventually settled the case and allowed PC makers to install their own software, but its reputation was badly bruised in the process.

Critics of Apple have said that once a customer buys their iPhone, they should have the right to download whatever apps they want, from anywhere they want. Apple has become increasingly reliant on revenue from services, include App Store fees, in order to grow its business. If users could download apps anywhere, Apple may feel pressured to lower those fees. But that's the whole idea of an open marketplace, which U.S. regulation is intended to protect.

Many developers charge iOS users a higher price if they make purchases on mobile versus desktop. Tinder, for example, charges $6.99 for a Boost on iOS, versus $5.99 if it's purchased through a browser.