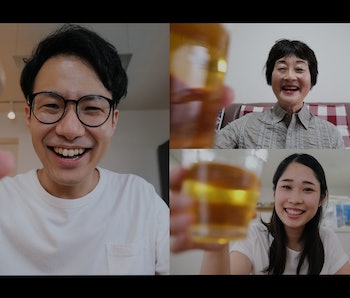 Microsoft has launched a personal version of Teams in preview. Teams competes with Slack and Zoom as an all-in-one workplace communication service that combines meetings, calls, chat, and collaboration in one place.

It's kind of weird that Teams is being repurposed as a personal service outside the workplace, but the pandemic has shoved these platforms into the casual setting. Microsoft also says it might appeal to groups of people looking to do more than just chat. Maybe you're trying to organize a vacation with your friends, for instance. With Teams you have a single place to coordinate and organize all relevant files, lists, calendars, and other information. The service is free.

With the launch of personal Teams, Microsoft is introducing a "Safe" tool that allows everyone in a Team to store and share sensitive information like WiFi and Netflix passwords. Users can also share lists, documents, calendars, and live locations. From a unified dashboard, users can see all the events, locations, tasks, and images that everyone has shared, organized by type.

Be nice to your Android friends — Teams isn't being rebranded for the personal use-case, which seems a bit odd for families and friends — "Teams" sounds like a work tool, not a personal one. It could fit a niche, however, for university groups who could move off iMessage to something that's multiplatform and more capable, if a bit less fun. The personal version of Teams is launching initially for iOS and Android, though after it exits preview Microsoft will likely add desktop support.

Slack also offers a free tier and people sometimes use it for personal business.

Confusingly, Microsoft already has two other casual group chatting services — Skype and GroupMe. The company says those apps still have loyal fanbases and that Teams serves a more specific niche.

Coronavirus wave — Microsoft has been investing heavily in Teams as an alternative to Slack for the hundreds of millions of people who already live in Microsoft's 365 productivity ecosystem. Slack CEO Stewart Butterfield recently said in an interview that Microsoft is "unheathily preoccupied with killing us." Microsoft has said that Teams has 75 million daily active users thanks to a big coronavirus surge, though Slack disputes that its users spend as much time in the app as Slack users do.

Teams is included in the Microsoft 365 bundle, meaning customers of one are customers of the other. Slack said last October that it had 12 million daily active users but hasn't updated the number since. Slack and Zoom have also reported big gains in usage as the coronavirus pandemic forces everyone to work and collaborate remotely.