"Microsoft was on the wrong side of history when open source exploded at the beginning of the century, and I can say that about me personally.” 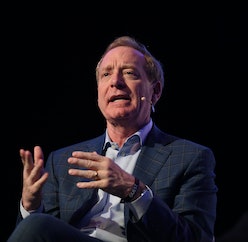 Nearly 20 years ago, former Microsoft CEO Steve Ballmer infamously said: “Linux is a cancer that attaches itself in an intellectual property sense to everything it touches.” Over time, the company’s feelings about open source have shifted from cancer to benign mole to flattering beauty mark. In a virtual webinar hosted by the MIT Computer Science & Artificial Intelligence Laboratory (CSAIL), Microsoft president Brad Smith admitted that both his and the company’s initial stances were misguided, before discussing modern privacy concerns and contact tracing.

Linux comes in from the cold — Smith isn’t all talk; Microsoft has demonstrated its ideological shift. Windows 10 ships with a Linux-friendly custom kernel and Microsoft acquired GitHub, the heart of the open-source developer community, according to ZDNet.

"Today, Microsoft is the single largest contributor to open-source projects in the world when it comes to businesses," Smith said in the CSAIL webinar. Earlier in his career at Microsoft, Smith served as a lawyer, and in those days, his ill will towards open source was well documented. Smith has made a complete about-face in recent years.

Obamstradamus — In the wake of the Edward Snowden leaks, Big Tech leaders met with former President Barack Obama to push for government surveillance reform. During the meeting, Smith was struck by a prescient comment from Obama: “I just want you all to recognize that you all have more data about people than the government does. And I have a suspicion that the guns will turn and there will be a moment when the demands that you're placing on the government will be placed on you as well.”

Of course, that moment came five years later amid the Cambridge Analytica scandal. Since that “political watershed moment,” as Smith calls it, tech companies have fallen under intense levels of public scrutiny.

Contact tracing — Smith also said he's unconvinced by the potential efficacy of Google and Apple’s contact tracing app. He worries about those without phones — from the homeless to those in Hospicare or other palliative care facilities — and the willingness of others to even use a monitoring app made by two tech giants. Smith doesn’t dismiss the idea of contact tracing entirely but suggests it's important to acknowledge its limitations.

“It's a belt-and-suspenders approach," he said, according to The Register. "We still will need public health officers to interview individuals who test positive, even if they've been using an app on their smartphone."