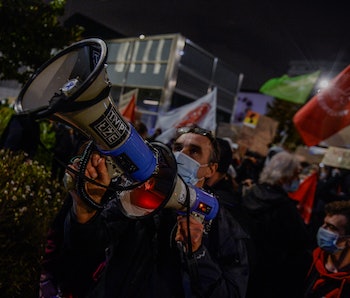 A non-profit based in France called Framasoft is trying to chip away at Facebook's dominance with Mobilizon, a free, distributed tool for hosting events and groups.

Free market, little choice — If you don't believe in a company's practices or business model, you can choose to take your business elsewhere. That's at least how the free market is supposed to work in theory. But the major tech companies have embedded themselves in so many parts of life that it can be difficult to completely rid yourself of their grip.

Facebook is probably the first place you go to host an event or start a discussion group because everyone already has accounts there. You may disagree with the company's practices but compromise because there are few other choices, therefore ensuring Facebook remains in its position. Framasoft wants to break that reinforcing cycle, which it believes hurts the original vision of the internet being a place for free and open expression.

The company was first inspired to make an alternative for activists to organize without needing to use their real identities, a requirement that Facebook imposes on all users. But it also believes by distributing this new product and allowing anyone to install it on their own servers, the internet as a whole will be healthier because a handful of companies won't wield such control over discussion or be able to create huge datasets.

The Mobilizon product reflects these beliefs with interesting features, like the ability to register for events using different identities but under one account. So you could, say, sign up for a protest using a different profile than the one you use to register for your dad's birthday party — that way what should be a lighthearted celebration doesn't turn sour as you fight with your parents over your political activism.

Mobilizon is also completely distributed, meaning anyone can install the software on their own servers and dictate their own rules for participation. Each instance has a page outlining its rules and data collection practices so you can decide for yourself whether you want to create an event or group there. Different instances of Mobilizon can be connected, if the operators choose, so that events and accounts can be shared across them.

Fighting the good fight — Distributed alternatives to the major social networks have popped up from time to time. Diaspora is the same concept for replicating all of Facebook. And there's Mastodon for Twitter. PeerTube is an alternative to YouTube.

None have exactly broken those company's grip on power because economies of scale still dictate that people use whatever service their friends are already on. But there definitely won't be alternatives if nobody tries, so it's good to see people out there at least attempting to build compelling products to challenge the major platforms.

Recent instances of Zoom shutting down political discussions highlights the place we're at today, where the major platforms are being pulled in every direction and hopelessly trying to appease everyone. But their sheer scale means they're in a losing battle, and one faction or another will always be harmed. Even in the likely case that Mobilizon doesn't become a breakout success, it could certainly be a win if even one group is able to organize on the service in private, without risk of being monitored or having their accounts erroneously shut down.

If you want to check out Mobilizon for yourself, there's a demo instance available to play around with.