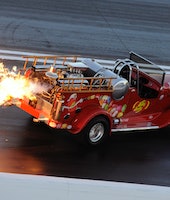 How many compliant trucks' emissions are produced by an estimated 550,000 modded pickups.

Automakers use emissions controls in their vehicles to balance the needs of good fuel economy with low emissions output. But some less scrupulous truck owners go to great lengths to disable these controls in an attempt to increase the performance or range of their vehicles — or so they can "roll coal" and feel like macho men — and that's having a significantly harmful effect on the environment.

According to a study by the Environment Protection Agency, roughly 550,000 medium trucks are estimated to have had their emissions systems tampered with over the last decade — or 15 percent of vehicles sold. And the excess pollution they release is significant: 570,000 tons of excess nitrogen oxides and 5,000 tons of excess diesel particulates are released over the course of these trucks' lifetimes.

What's more, the EPA believes that this excess pollution has the equivalent effect on the environment of adding more than 9 million additional, compliant trucks to the road.‌‌

Hypocrisy — The irony in all of this is that truck owners who disable their vehicle's emissions controls often do so arguing it's a power play in defense of personal freedom. It's their vehicle and they should be able to do whatever they want with it, the thinking goes. But air pollution kills people. You're more than welcome to commit harm to yourself, but nobody's personal freedom extends to harming others.

It's the same flawed logic that certain factions use to protest mask mandates. By walking around without a mask, you risk catching the coronavirus and unknowingly passing it to someone who is immunocompromised. Wearing a mask, or respecting emissions standards, is not about you, it's about everyone else around you.

Unfortunately, both environmental regulation and the coronavirus pandemic are highly politicized topics, so logic and fact don't much matter. Truck modders don't believe global warming is a thing, and will reduce the efficiency of their engines — to balance good mileage and low emissions — even just to "own the libs" as the saying goes.

Regulation works — On the positive side, the data demonstrates that emissions standards do work. The air in major U.S. cities used to be smog-ridden before the Clean Air Act of 1970 was passed, which forced automakers to improve fuel economy and reduce harmful pollution. Car companies likely wouldn't have made these changes had they not been forced to. Volkswagen famously cheated emissions regulations to hide smog when its vehicles were tested because it didn't want to invest the resources to meet the standards.

Furthermore, the EPA's data indicates that disabled emissions controls are more common in trucks found in states where regular inspections are not required by law, like North Dakota.

Look no further than Asia's infamously smoggy skies to see what could have been had the U.S. not regulated emissions as it has. It's estimated that air pollution in China and Taiwan has caused 30 million premature deaths since 2000. Trying to beat that in America isn't patriotic or smart or sexy... it's moronic.