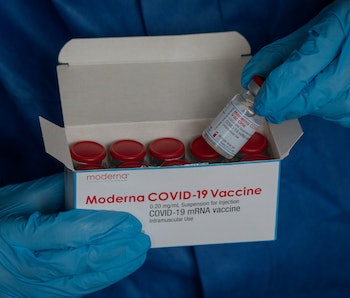 Researchers at Stanford University obtained leftover droplets of Moderna’s COVID-19 vaccine and reversed engineered the samples before posting the sequence behind the vaccine on GitHub.

According to newly released data from the World Health Organization, more than half a billion COVID-19 doses have been administered worldwide. In places like the UK and Israel where inoculation rates are high, the curve of severe cases and deaths from COVID-19 is bending downwards.

Transparency — The world is still not out of the woods yet, however, and the next challenge after manufacturing enough supply of the various vaccines and getting them to those people who want them will be reaching people who remain wary of receiving one. Besides outlandish conspiracy theories that have spread on social media of vaccines being embedded with tracking chips, some people are wary that the fast pace at which the vaccines were developed suggests they might not have been sufficiently tested.

That idea has been widely debunked as vaccine trials have been conducted in rapid parallel to meet the unprecedented need, and the mRNA technique that unpins most of them has been in development for over two decades. The four-page document published on GitHub includes two pages of the mRNA sequence for the Moderna COVID-19 vaccine.

Speaking to Motherboard, the Stanford researchers say that sharing Moderna’s specific vaccine sequences will help differentiate them from other vaccines and allow for easier analysis of biomedical data as more people become vaccinated. “While anyone interested could data-mine and filter these sequences out later, there is a substantial economy of scale and educational value in having the sequences available ASAP and in not having to guess where they have come from,” they said.

It’s unlikely that anyone would use the published sequence to manufacture vaccines themselves due to the sheer complexity involved.

Post-mortem research — There are still some questions about what happens after receiving a vaccine, such as whether or not a vaccinated person can still spread COVID-19 asymptomatically. More transparency about vaccine information could allow researchers to identify how various vaccines might differ. Unfortunately, many of the vaccines out there now have been patented and their sequences haven’t been made readily available, which seems crazy. Any kind of life-saving data should always be available to the public. Big pharma still deserves credit for the rapid pace at which they made vaccines, of course, and should be able to recoup for the doses they manufacture.

The Stanford researchers say they contacted Moderna to indicate they wanted to publish the sequence online, but nobody got back to them so they went ahead with it. By sequencing just the droplets of leftover vaccine, they didn’t remove any from the supply available to the public.