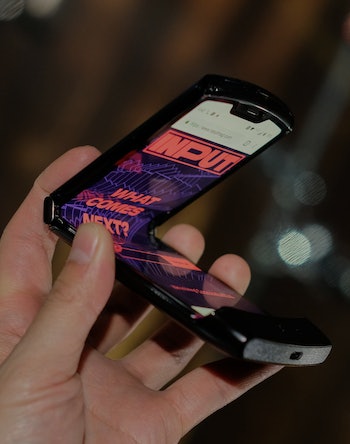 Motorola did it: the iconic RAZR phone is back, reborn as the razr (all lower case), an Android smartphone with a foldable display that bends in half.

I had 3 hours of playtime with the insanely cool-looking razr yesterday and I can’t stop thinking about the futuristic phone (I even dreamt about it last night!). Me, the guy who has for years been fervently dismissing foldable phones as a passing fad is now obsessed with getting this foldable phone into my pocket ASAP.

Launching in January 2020 for $1,499 — As Samsung and Huawei have both made clear: phones with foldable displays are going to cost a premium. The razr is no different. It’s launching exclusively on Verizon in the U.S. on January 9, 2020 for $1,499 (or $62.45 per month paid over 24 months with a payment plan). Pre-orders will start on December 26. The razr is really pricey compared to thousand-dollar phones like the iPhone 11 Pro, but when you pit it against a $1,980 Galaxy Fold or $2,400 Mate X, it’s practically a steal.

Throwback to an iconic design — It’s no exaggeration to say the original RAZR, released in 2004, gave cell phones something they previously didn’t have: sex appeal. There were good-looking cell phones before the RAZR like the Motorola StarTac and Nokia 3310, but the RAZR made cell phones thin, light, and sleek.

The new razr evokes the RAZR’s iconic silhouette while upgrading everything. The body’s made of durable stainless steel and glass, the back’s got a subtle texture for better grip, and there’s, of course, the flexible plastic OLED display. The razr is wider than the original, but it’s about just as tall when open and roughly the same thickness (14mm) folded up.

Motorola also made sure to keep the RAZR’s notable “chin” in the new razr, enhancing it for modern utility with a fingerprint reader, a USB-C port that supports fast charging via the included TurboPower power adapter, and a large speaker chamber for improved sound.

I don’t care what anyone else thinks: the razr is pure gadget lust. A sliver from the future coming to disrupt the monotony of glass-and-metal slabs. Unlike other foldables that are trying to fold a tablet into a phone, the razr solves a real problem that needs solving: folding a big phone into a smaller phone so that it’s actually pocketable.

There’s no crease — Samsung’s Galaxy Fold, Royole’s FlexPai, and Huawei’s Mate X all have distracting creases where the screen folds in half, and they’re hard to unsee. The razr’s 6.2-inch 21:9 flexible plastic OLED display (2,142 x 876 resolution) doesn’t have a crease. There’s a slight ripple in the display that’s barely noticeable when you fold the razr up. But there’s no crease when it’s open, which makes looking at content like videos and websites a lot more immersive. I love it.

More durable — Samsung caught major flak for the Galaxy Fold’s poor durability — initial review units seeded to journalists broke down when debris got lodged underneath the display via gaps in the hinge — but Motorola reassured media that it has thoroughly stress-tested the razr to endure harsh everyday conditions.

In addition to using robots to fold and unfold the display over and over (it’s unclear how many folds the screen can withstand), Motorola says it put the razr through the same battery of stress tests its other phones need to pass. That includes tossing the razr around with other objects inside of a drying tumbler and dropping it at various angles to check for impact damage. And in a subtle jab at Samsung, Motorola says 90 people have been dogfooding the razr in the real world to subject it to real conditions.

Furthermore, Motorola’s engineers and designers said they went through great lengths to apply a proprietary coating to the plastic display so it doesn’t get damaged. They also engineered the custom hinge’s gears to not only last the lifetime of ownership but also block out debris and liquid.

Smartphone specs — The razr comes with a Snapdragon 710 chip, 6GB of RAM, and 128GB of storage. These are mid-range specs and not the latest and greatest chip Qualcomm offer, but from what I saw, Android 9 Pie runs smoothly (Motorola’s always stuck with near-stock Android which helps with responsiveness). Motorola says the razr’s dual batteries (built into the top and bottom halves), which total 2,510 mAh, last “all day.” That’s not very specific, but if the phone’s closed most of the day, you should, in theory, be able to get long battery life.

Secondary screen isn’t a gimmick — Like the original RAZR, the new razr has a smaller screen on the outside called the “Quick View Display.” This 2.7-inch 4:3 OLED display (800 x 600 resolution) shows the time, notifications, music player controls, and provides Quick Settings controls. But that’s not all it’s useful for. Twisting the phone activates the 16-megapixel f/1.7 rear camera for taking selfies (there’s also a 5-megapixel f/2.0 camera on the inside of the phone for selfies, too).

The Quick View Display is also good for video calls and has its own version of the Galaxy Fold’s “App Continuity,” for transitioning app experiences between the outside and inside screens. Developers will have to program their apps for the Quick View Display, but Motorola tells me it won’t be a heavy lift.

Foldable phone done right? — Three hours is not enough time to really know the ins and outs of the razr. I still have so many questions! Is it really more durable than the Galaxy Fold? Are its mid-range specs good enough? How good are the cameras? Will apps work properly with the unorthodox display and aspect ratio? Will developers really adapt their apps for the Quick Display View screen? Can the puny (on paper) battery capacity go the distance? Will the form factor bring phone calls back? Why doesn’t it come in pink?

I haven’t been kind to foldable phones because pretty much all of them are just overpriced experiments. The razr is the first foldable phone that actually seems thoughtfully considered and feels polished inside and out. Exciting times are ahead! I’m hopeful the razr is a catalyst for innovation in the very mature (but very stale) smartphone world.