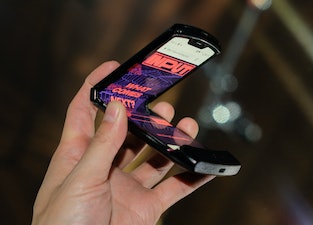 The street date you can get the phone... if you're on Verizon.

Motorola's Razr has a new release date: February 6. Pre-orders start on January 26 at Verizon, Walmart, and Motorola. The foldable Android smartphone was delayed in December due to higher-than-expected demand. Originally slated for a "January 2020" release, it sure looks like Motorola is looking to beat Samsung to being the first foldable phone of the year. Samsung is expected to unveil its own foldable phone, the rumored "Galaxy Z Flip" on February 11.

For Verizon customers only — The Razr's price hasn't changed since it was announced. It's still $1,500 (less than the $2,000 Galaxy Fold, but more than an entry-level $1,000 iPhone 11 Pro). However, the biggest wrinkle is that the phone's exclusive to Verizon in the U.S. If you're on another network, it won't make much sense to purchase the phone.

Battle of the foldables — Motorola and Samsung will be the first two with foldable phones this year, but expect other phone makers to jump on the bandwagon, too. At CES, we saw plenty of foldable phones and concepts from companies like TCL and Royole.

There's no one foldable phone form factor that has emerged as a frontrunner. Will consumers favor foldables that open up into larger tablets? Or will devices that fold down into smaller sizes like the Razr and Galaxy Z Flip be more popular? 2020 will be a battleground for these experimental devices to duke it out.

Ultimately, phone makers will have to solve for the biggest challenges foldables still face: durability. Even with the new crop of foldables, I haven't been convinced that they're less fragile than devices like the Galaxy Fold and Huawei Mate X. Perhaps, bendable glass displays instead of plastic OLEDs could change my mind.