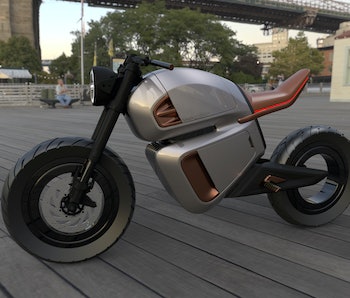 CES 2020 will have plenty of 8K TVs nobody can afford, and concept phones, and "artificial humans," and this beautiful electric motorbike made by Nawa Technologies that I'm dying to check out. Besides its sleek 1960s cafe racer-inspired carbon fiber body, the Nawa Racer has a special hybrid battery system that combines an ultracapacitor with lithium-ion to allow for up to 80 percent of its braking energy to be reused.

Doubling the range — With the regenerative braking, the Nawa Racer can reportedly double its range from about 93 miles to about 186 miles (useful for riding in cities where you're starting and stopping more often). That's wild!

Lighter ride — In addition to more range, Nawa Technologies claims its battery system reduces the size of the lithium-ion battery by up to half (the Nawa Racer's battery weighs only 22 pounds) when compared to other similar-sized electric bikes. The lighter battery also means the Nawa Racer is lighter, too: 330 pounds total thanks to its carbon fiber construction.

Fast to start, race, and charge — The sleek e-bike can go from 0 to 62 miles per hour in "under three seconds" and has a top speed of about 99 miles per hour. Furthermore, the bike's fast to charge: the ultracapacitor "NAWACap" charges up in two minutes and the whole battery to 80 percent in roughly an hour.

Street legal or concept? — CES has a ton of concepts. Nawa Technologies calls the Nawa Racer a concept seven times in its press release. Sometimes concepts are close to production and sometimes they're not. I'm hoping we see it on streets soon.

More like this
Jackson Chen
13 hours ago
Tech
Volkswagen's sleek ID.Aero concept is a blueprint for its EV future
Will Gendron
6.17.2022 5:00 PM
Tech
This EV-charging robot risks its life to save you a parking spot
James Pero
6.18.2022 1:30 PM
Father's Day
The 6 best electric bikes for dads who are dying for a new ride