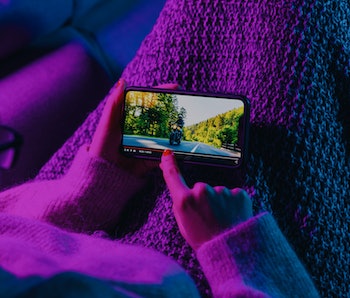 Netflix knows that watching it on an Android phone be an auditory nightmare, and it’s finally doing something about it. Shortly after announcing the use of a new codec (h/t The Verge), Netflix revealed that members using Android 9 and up would be able to benefit from it. In addition to being a mouthful, extended HE-AAC (xHE-AAC) with MPEG-D DRC allows for dynamic volume management, another step in Netflix’s newfound interest in audio.

Less straining and fewer surprises — Watching anything, particularly more dramatic works of fiction, on any platform is often met with the issue of whispered dialogue juxtaposed against explosively loud music or sound effects. xHE-AAC essentially serves as an equalizer, trying to create a standard between the different volume ranges each genre ascribes to for maximum emotional effect.

Netflix is normalizing loudness and taking into consideration the volume levels one might use on a phone. When amplifying the low end in genres like action and thriller, the top end of the range leads to clipping, so it also deploys peak limiting to save your ears.

Dynamic range control (DRC) algorithms can also compress the highs and lows in a more intricate way that doesn’t distort the audio. Used in concert with xHE-AAC, this process allows for different experiences based on whether you’re listening from your phone’s speakers or in a noisy environment.

Audio is catching up — Adaptive bitrate is a mainstay for streaming video, allowing for generally seamless quality toggling to compensate for connectivity issues. Audio codecs have been static for a long time, with adaptive qualities only hitting Netflix’s TV apps in 2019. Now Android phones can leverage xHE-AAC to experience fewer audio buffering moments.

This functionality is expected to roll out to other compatible platforms, and since the iPhone has supported xHE-AAC since 2019, the iOS app will likely see a similar update soon. In the meantime, Netflix seems to be leaning into improving its audio experience. The implementation of this codec would pair well with its spatial audio plans. At the very least, it’s setting itself up for more immersive content with the potential to make bigger moves in VR.