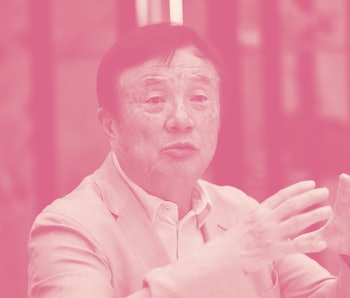 Huawei used a Chinese, state-owned company to facilitate the sale of U.S. computer equipment to an Iranian mobile phone operator, according to Reuters. The new details add further evidence to an indictment from the Department of Justice charging that Huawei sold hardware and software to Iran despite U.S. sanctions. Huawei has always denied the claims, and the suggestion its hardware can be used for spying. Huawei's even tried to sue the U.S. government in response, albeit unsuccessfully.

Reuters obtained documents from 2010 outlining an agreement between Mobile Telecommunication Co of Iran (MCCI), the country's biggest wireless carrier, and Huawei, for work on a major upgrade to MCCI's billing system. Huawei has denied it participated in the upgrade, but leaked documents state "the equipment contract was signed" and Huawei was asked to move forward with the project. Huawei is the world's largest provider of telecommunications equipment and network solutions, despite the U.S.'s ongoing attempts to limit the Chinese company's reach.

Huawei says it never followed through — It's still possible Huawei never followed through with the plans as it claims, but Reuters also managed to obtain price lists and packing documents for hardware including HP server equipment destined for MCCI. The documents include Huawei's logo, and while the news agency was unable to find customs documents confirming the hardware was ever shipped, it did obtain later Huawei-branded documents stating that the equipment had, indeed, arrived in Iran. Even if it didn't succeed in the sale, if the documents prove it tried they're extremely damning.

In order to hide its participation in the illicit transactions from U.S. officials Huawei used a Chinese company called Panda International to initially purchase the American hardware, worth more than $10 million. Panda's website states it has a "long and deep history with Huawei." An invoice between MCCI and Panda requested that the Iranian carrier direct its payment to China Construction Bank's branch in Shenzhen, where Huawei is based.

Why Huawei used Panda — By using Chinese-based Panda International as a go-between to purchase the hardware, Huawei could hide its participation. Panda is a state-owned company that doesn't do business in the U.S., meaning its wasn't subject to the same sanctions as Huawei, which has done plenty of business with U.S. operators, especially in rural areas where its cheaper equipment has proved appealing.

The U.S. government, however, seems to have figured out that Panda was passing hardware on to Iran and, in 2014, blocked the company from working with U.S. businesses by adding it to the now notorious "Entity List" — the same list that Huawei is on today, and which prevents it from using Google Apps on its smartphones. To rub salt in the wound, the U.S. Senate last week approved a bill to help make it financially viable for mobile operators in rural areas to replace Huawei components in their networks.

The existing indictment against Huawei includes its use of an Iranian-based subsidiary called Skycom to facilitate transactions. The new documents obtained by Reuters are different in that they show Huawei working with Chinese state-owned companies as intermediaries to obfuscate its involvement in illegal activity. The new paper trail is going to make it far harder for Huawei to continue to plead innocence.