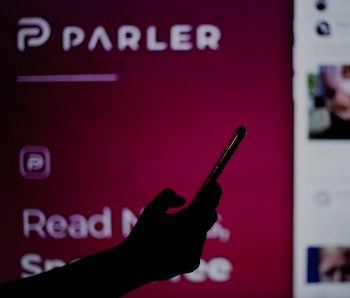 Parler is officially available on Apple’s App Store again as of today, and it’s been re-uploaded with some iOS-specific caveats. The iOS version of the Parler app will utilize a new artificial intelligence moderation system to mark hate speech — including racial slurs — as such; this content will then be rendered invisible to iOS app users.

It’s been more than four months since Apple first pulled Parler from its App Store, on the grounds that its lax moderation policies did not match up with the App Store’s fairly stringent safety measures. Apple has decided that the platform’s new AI moderation works well enough to reinstate the Parler app.

Both Apple and Parler have taken the middle ground here and compromised. That will get Parler’s iOS app back up and running but it won’t solve any of the alt social network’s penchant for harm.

In order to carry out this AI moderation, Parler is working with AI moderation company Hive, which works on sites like Reddit and Chatroulette. Hive has contracted more than a thousand moderators to work on Parler’s platforms. The company says about 99.5 percent of posts are deemed safe based on algorithmic review, while the remaining 0.5 percent are thrown to human moderators.

The hate hasn’t gone anywhere — The problem, of course, is that hate will continue to thrive on Parler — Apple is just allowing iOS users to ignore that it exists. That’s something of a letdown from Apple, after the company took an early stand against Parler’s potential for hate and violence. Now iOS users will perhaps feel more comfortable on Parler, ignorant of the hate being spewed all around them.

Meanwhile, Parler isn’t so concerned about reinstating its app on Google’s Play Store, according to The Washington Post. It’s easy enough to sideload the Parler app onto an Android device.