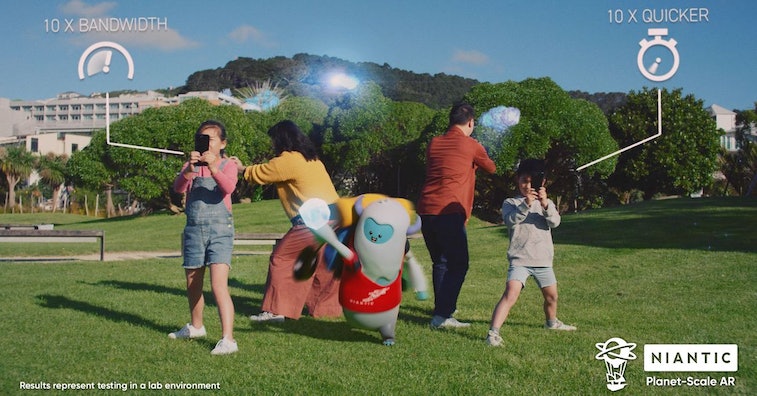 Niantic single-handedly revitalized interest in augmented reality (AR) gaming with the release of Pokémon Go in July 2016. The game skyrocketed to the top of app store charts; it had been downloaded more than 500 million times by the end of 2016. Not to mention the way it actually got gamers out into the cold, dark world to locate and catch ‘em all.

Now the developer is ready to forge a path for even more impressive AR experiences with its forthcoming title Codename: Urban Legends. We’ve finally been given a peek at what the mobile game has in store for us — and it looks like there’s a lot to be excited for.

Codename: Urban Legends is, like Pokémon Go, all about fantastical beasts. These are not friendly fighters, though — they’re out for the kill. You’ll have to power up various types of magic, like fireballs and frozen projectiles, to defeat them alongside your friends and neighbors.

Besides being chaotic and fun, Niantic is also using the game to show off the power of 5G in keeping the massive-multiplayer AR experience smooth. The company says that, with the speeds of 5G behind it, the new game can handle up to 10 times more simultaneous players than it could on 4G.

Planet-wide AR — Niantic’s moonshot goals have expanded significantly in the last few years. The company is still all-in on creating exciting experiences for consumers, but Niantic’s also investing heavily in the backend technology necessary for these experiences to evolve upward.

Codename: Urban Legends is the first major test of what Niantic is calling a “planet-scale AR platform.” It’s the core technology used to power Pokémon Go but much, much bigger.

Niantic has teamed up with major 5G networks, like Verizon and Deutsche Telekom, to test its platform to the extreme. So far Niantic has found that 5G improves game latency 10 times over while also allowing 10 times more simultaneous players. The company promises 5G will eventually reduce battery drain, which has long been a problem experienced with AR gaming.

Glasses incoming, too — Codename: Urban Legends is only the beginning of Niantic’s current development projects. The company recently announced an extended partnership with Nintendo to create AR games, the first of which will be based on the popular Pikmin franchise.

And Niantic isn’t stopping at software, either. CEO John Hanke teased a pair of Niantic smart glasses on Twitter this week along with a cryptic message about “progress.” It might be a few years before consumers can purchase those, though.

All in all, Niantic is really positioning itself to be a power player in the gaming industry and, more largely, in the rapid expansion of gaming-focused augmented reality technology.