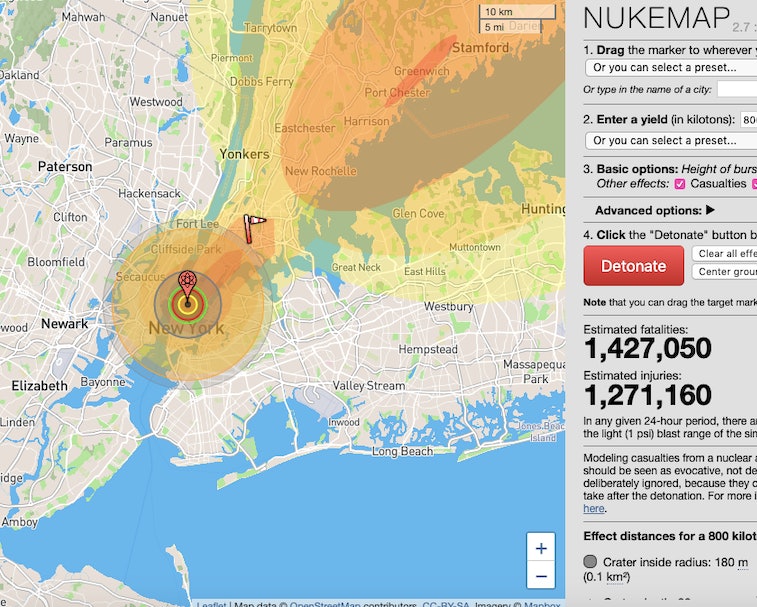 The internet's favorite interactive nuclear blast estimator just got a major update to make it more server-friendly. Nukemap creator, Alex Wellerstein, introduced the latest version of the tool in a tweet today. Version 2.7 brings improvements that should help cut down on choppy loading times while you map out the deaths of yourself and everyone you love.

Why do we do this to ourselves? — Nukemap is a great tool for fueling your end-times anxiety. It's designed to estimate the devastation in any given city that would occur in the event of a bombing. That could be an air or surface blast from a device as small the U.S.'s 20-ton portable Cold War nuke, nicknamed "Davy Crockett," or as large as the USSR's 100-Megaton "Tsar Bomba." And there's lots of room for variation in-between, of course. It's like the WebMD of nuclear panic; I love it.

Nukemaps could certainly be useful in some very real ways too, though, helping you plot out where exactly to construct your bunker for the worst-case scenario. Or, more importantly, law enforcement and other agencies could use this to craft emergency response plans for dense urban areas; NASA does something similar with asteroid simulations that, while scary, are only for our own good.

What's changing? — According to Wellerstein, Nukemap will divvy up the casualties to go lighter on the servers. "Instead of processing all casualties at once, it breaks them up locally into overlapping or non-overlapping detonations, and then goes about each of them serially," Wellerstein noted on Twitter. "This is MUCH easier on the server, because the SQL query for multiple detonations is gnarly."

There are still some issues, especially when it comes to overlapping detonations. We've had some difficulty testing it out today and have flagged the issues to the tool's creator. But overall, the update should eventually make for a smoother experience. If you're trying it out for yourself, just make sure you see that 2.7 stamp in the corner.