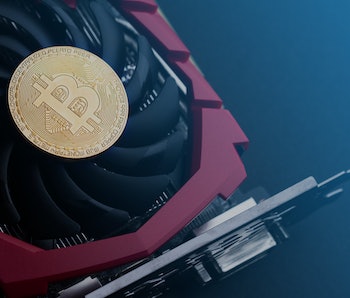 Nvidia is set to release its RTX 3060 graphics card next week, a more affordable card in its 30-series lineup, and the company wants to make it available to as many gamers as possible. It hopes that it can accomplish that by making the card unattractive to cryptocurrency miners trying to capitalize on rising demand for Ethereum — and by releasing a new card tailored to that market.

In a blog post, Nvidia writes that it has designed the 3060 to identify the signs of mining activity and deliberately throttle down performance. "RTX 3060 software drivers are designed to detect specific attributes of the Ethereum cryptocurrency mining algorithm, and limit the hash rate, or cryptocurrency mining efficiency, by around 50 percent."

A Truce — Graphics cards are ideal for their high performance that can handle the mathematical tasks required to create new ethers (the Ethereum currency). Speculators hoping Ethereum is the next Bitcoin have driven its price up by 33 percent in the past month alone, to $1,825 per ether, so it's no surprise that miners are willing to pay a premium for the best cards. Demand for graphics cards was already high, however, as people spend more on at-home entertainment, meaning miners were just making it that much more difficult to upgrade your gaming rig. Not fun during a pandemic when you can't exactly do much else.

Nvidia still wants the business of miners, so it's also today announcing CMP, or Cryptocurrency Mining Processor, a new product line for professional miners. "CMP products — which don’t do graphics — are sold through authorized partners and optimized for the best mining performance and efficiency," says Nvidia. "They don’t meet the specifications required of a GeForce GPU and, thus, don’t impact the availability of GeForce GPUs to gamers." They're supposed to be more efficient in part because they lack outputs for a display, meaning they can be more densely packed in a server farm.

Global shortages — Nvidia announced last week that it will bring back older graphics cards that might be sufficient for entry-level gamers who don't necessarily care for the type of high resolutions and frame rates promised by the 30-series. The older cards are built on older manufacturing processes not being utilized to make the latest cards that everyone wants.

The moves could somewhat help alleviate insatiable global demand for graphics cards and microprocessors, though scalpers hoping to make a quick buck will surely remain. The worldwide shortage of processors and graphics cards has gotten so bad that some automotive giants have been forced to slash vehicle output — everything needs a chip these days. It's expected the problem will continue until the third quarter of 2021.