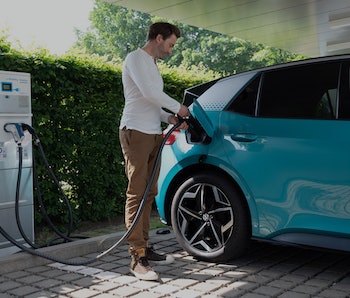 Charging your electric vehicle in the Big Apple is about to get a little bit easier. New York City is planning to install about 100 curbside EV charging stations in the next few months, as part of a larger push to meet stringent environmental goals. The Wall Street Journal reports that the city hopes to have these stations ready for public use by October of this year.

All 100 ports will be “level 2” charging stations, which basically means they’ll use a higher-output 240-volt power source to charge vehicles more quickly. Twenty additional chargers will be installed around the city specifically for use by government-owned electric vehicles.

“If New York City is going to reduce and ultimately eliminate its carbon footprint, it’s critical that whatever cars exist in the city be electric,” said Department of Transportation Commissioner Hank Gutman.

The city has set itself an ambitious goal of being entirely carbon-neutral by 2050. Many big automakers are now on board with ditching gas entirely in the not-too-distant future, but making these high-flying goals truly sustainable will require a fair amount of infrastructure that just doesn’t yet exist.

Took you long enough — NYC’s Department of Transportation (DOT) says nearly 15,000 all-electric vehicles have been registered within city limits. This number, of course, does not include the many commuters and tourists driving in from New Jersey and the surrounding tri-state area who also have electric vehicles.

And yet only about 1,400 level 2 charging outlets — as well as just over 100 fast-charging outlets — exist across the entire city. The vast majority of those exist in Manhattan parking garages, according to the DOJ. Not exactly accessible for the masses.

A start, at least — The city DOT knows it’s lagging behind when it comes to wider electric vehicle adoption. There simply are not enough chargers to go around in NYC — and of those available, many are owned and operated by private companies.

Adding 100 new charging stations will alleviate some of the gaps between the number of EVs and the number of chargers in NYC. The city would need to add thousands more to actually be ready for the 15 k all-electric vehicles registered there — and that number is only set to climb higher, as the world’s largest automakers ramp up their move away from gas-guzzlers.

New York City says more than 21,000 level-2 chargers will be available in the five boroughs by 2025, thanks to a $310 million investment by utility company Con Edison. Given that it’s taken this long to even install 100 new chargers in the city, we’re not convinced that timeline is realistic, but at least these are steps in the right direction.