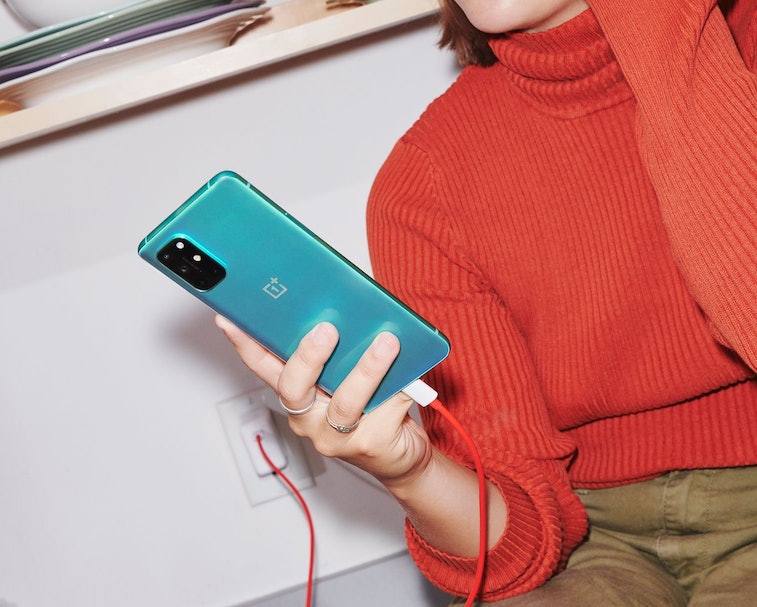 It's a crazy month for smartphone launches. We have the Pixel 5, four versions of the iPhone 12, and the new OnePlus 8T.

Coming out on October 23 (pre-orders start today), the OnePlus 8T is an upgraded version of the OnePlus 8 (not to be confused with the 8 Pro) and starts at $749. "T" versions used to be the equivalent of an iPhone "S" model, but as you can see, the 8T has a few key changes over its predecessor.

Flat 120Hz display — The OnePlus 8 had a display with curved edges. It looked elegant, but flat displays are back in style. Taking cues from the Nord, the 8T has a flat 6.55-inch (2,500 x 1,080) AMOLED display. OnePlus has bumped up the refresh rate from the 8's 90Hz to 120Hz to match the responsiveness in the 8 Pro's display.

OnePlus says the camera should take similar photos to the OnePlus 8, which as I showed in my OnePlus 8 Pro review, aren't quite as good of a camera as the 8 Pro. The ultra-wide lens also has a wider 123-degree field of view. But we'll see! I'm in the middle of testing the 8T and its cameras to see how the main camera really compares. I'll have a review soon that breaks down the quality of the cameras. Are the higher resolution macro lens and the monochrome lens (supposed to help with details) any good? Stay tuned!

Bigger battery and faster charging — The third new feature worth highlighting on the 8T is the larger battery (4,500 mAh versus 4,300 mAh on the 8) that's capable of OnePlus's Warp Charge 65. With the included 65-watt charger (unlike Apple, OnePlus includes a charger, and a fast one, too), the phone can charge from 0 to 100 percent in about 39 minutes according to OnePlus.

Android 11 — The 8T ships with OxygenOS 11, which is OnePlus's customizable version of what is essentially stock Android 11. In addition to getting all of Android 11's new features, OxygenOS 11 also brings an always-on display (finally), improved dark mode, and tweaks for better one-handed usability (many of OnePlus's apps have been reworked to put buttons and controls at the bottom of the display instead of the top).

Other new software features include speech-to-text for English and Mandarin Chinese in the Notes app (coming in a future software update) and Zen Mode 2.0 that lets you invite friends to take a break from using your OnePlus phones together.

At this price, the 8T has a lot going for it. Here's how it compares with other 2020 phones in the same price class:

Who should buy the 8T? — Probably not for OnePlus 8 owners. If you've got an older OnePlus phone and don't want to splash out at least $900 for the 8 Pro, the 8T looks like a solid buy. It's your usual high-quality glass and metal sandwich. There's no wireless charging or official IP rating (it's got general splash resistance) and there's no headphone jack (no biggie since the new $50 OnePlus Buds Z or the $80 OnePlus Buds offer a lot of bang for buck), but otherwise, a good value. No surprise, this is OnePlus after all.

Again, I'll have a full review soon on Input. Until then, enjoy the pics.

And here's the OnePlus Buds Z. They're essentially OnePlus Buds with ear-tips that are somehow cheaper, too? Crazy.