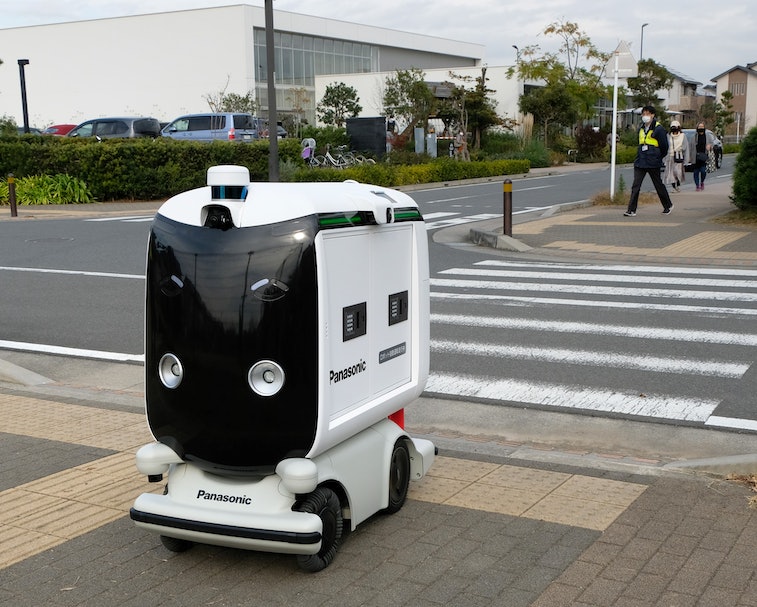 Panasonic has begun testing a new delivery robot in Japan that will transport food and other staples to residents near Tokyo starting in February. The robot is autonomous but human overseers will monitor its movement and watch out for problems.

Robot race — Delivery robots are nothing new — a leader in the space called Starship already delivers food using robots to students at George Mason University in Virginia (check out the video below). Postmates, meanwhile, has been testing a delivery robot in Los Angeles called Serve that can carry 50 pounds and travel 30 miles on a charge, though it's not yet allowed to make deliveries without a human tester following close behind.

As with other delivery bots, it looks like Panasonic's little guy includes cargo bays that can be unlocked with a code. The front has a face that's supposed to endear you to it, lulling you into a false sense of security before it releases the poison gas (kidding).

Trade-offs — It's unclear whether these types of robots will be the future of delivery. They're quite slow and have a small delivery range. But they could be cheaper than relying on a human coming to you, at the same time causing congestion and doubling the cost of your Chipotle burrito. Postmates has said its robots could augment humans by delivering straight to customers when possible and at other times bringing orders to a dispatch hub, where a driver would complete the last mile.

Other companies including Amazon and Google have been experimenting with ways to delivery goods using drones. The idea is similar but drones can at least move faster because, of course, in the air they aren't encumbered by obstacles to watch out for.

What would be really cool would be if the Boston Dynamics dog could fetch me an ice cold beer at the end of the day. That's definitely something I'd be interested in.