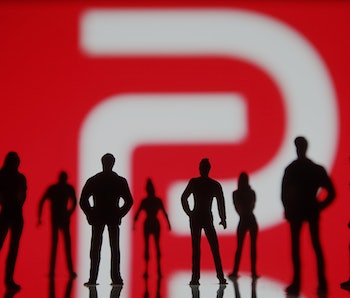 Apparently Parler has decided it does see limits to free speech. The so called “premier free-speech” social network of the right has called on Twitter to ban Taliban-related accounts from its platform. The statement comes in a statement release by CEO George Farmer, who added that “Terrorists should not be given free rein on social media.”

Some important context to note is that Parler’s “anything goes” attitude towards content moderation — which it touts as the main difference between it and Big Tech — is the very thing that helped foment the violent actions at the U.S. Capitol on January 6. The social network was swiftly taken offline as its hosting provider, Amazon, cut off service, and both Google and Apple pulled its app from their respective stores.

Parler has since come back online and been reinstated by Apple — though only after it made a concession to filter posts seen by iOS users. The social network doesn’t seem to be particularly popular, despite seeing a boost in downloads in the run up to President Biden’s inauguration, when the right was crying fowl and claiming Facebook and Twitter were unfairly censoring their views.

Parler has a ranking of 60 in the News category of the App Store, below apps like USA Today and Police Scanner +. Twitter is in the top spot.

Dynamic situation — It’s true that Twitter is allowing some members of the Taliban to share tweets, including its spokesperson, even after the group’s forced takeover of Afghanistan. The organization is banned from Facebook, though Forbes reports that company hasn’t yet decided whether it will allow the group now that it has effective control of an entire country including the presidential palace.

The Taliban is not technically considered a terrorist organization, which puts social media platforms in a tricky position. Historically, Twitter and Facebook have taken the position that world leaders should be exempted from most rules because the public has a right to know what their governments have to say and may be thinking. That changed when former President Trump was banned from Twitter and Facebook, however, so social media platforms seem to be taking a wait-and-see approach this time around.

The Taliban has said it will rule Afghanistan differently this time than in the 90s, when the group was much more violent and oppressive. But many are skeptical it will live up to its promises.

Twitter and Facebook are free to moderate their platforms so long as they don’t knowingly allow illegal content, but that leaves a lot of grey area. Ultimately, leaders at both companies have said they don’t like being responsible for making moderation decisions around things like political speech that might be false, and want government leaders to provide more guidance. Right now, both Twitter and Facebook use the U.S. government’s list of designated terror groups to decide such bans.

Laughable — Though the Taliban is inarguably a despicable group, Parler is not exactly standing on any moral high ground here by saying it should be banned. “Violent terrorist organizations, by definition, are uninterested in free exchange of ideas and have no place in the digital public square,” Parler’s Farmer added. That’s true, but his own company is known for fomenting and supporting the same type of dangerous rhetoric. Charitably he’s correct, but cynically Parler never would have cleaned up its platform at all had it not been kicked offline.

Farmer’s new statement is just a cheap way to get the attention. And, ultimately, Parler exists as a toxic place for conservatives to echo each other’s bad ideas and misinformation — that’s no better than the Taliban.