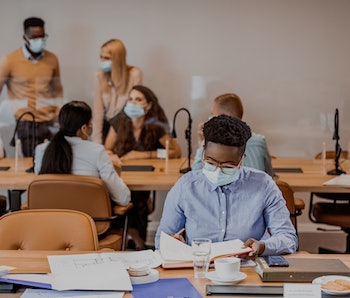 College tuition is expensive enough on its own, but college textbooks make the financial burden even more unbearable. Pearson Education — the British publishing company responsible for a huge portion of textbook sales around the world — is finally relieving some of that weight by introducing a subscription textbook service.

For just $14.99 per month, students currently enrolled in a degree program can access unlimited textbooks through the Pearson Plus app. There’s also a $9.99 per month option that allows access to just one textbook at a time. The subscription will at first be available only for colleges and universities based in the United States, though Pearson has plans to conduct a more global rollout at some point in the future, The Verge reports.

Textbooks can be a few hundred bucks each, so $15 each month is a very attractive option for the many broke college kids across the country. It would be surprising if this didn’t catch on fast.

Probably worth it — How much worth you’ll find from Pearson Plus is very much up to how many textbooks you need at any given time, and how many of them are published by Pearson. For the vast majority of college students, four months of Pearson Plus — a total of $60 — will likely be equivalent to (or less than) the cost of just one textbook.

Of course, a subscription service isn’t for everyone. If you’re the kind of student who prefers keeping their textbooks for the long haul, Pearson Plus definitely won’t be as attractive, since you won’t actually own any of the materials you read. And not every textbook will be available on the app — only Pearson’s own textbooks, of course.

The Spotify-ification of it all — Subscription models have proven very, very successful for the entertainment industry. Spotify is a prime example of this phenomenon; consumers jumped at the opportunity to pay one monthly fee for a huge catalog of music rather than purchasing each track, EP, or album individually. Netflix (and every other streaming television service) prove beyond a shadow of a doubt that this model absolutely works.

While immensely successful for those running them, these services are often criticized for their minimal payouts for those actually creating the streaming material. Artists on Spotify only make 0.35 cents per stream, for example. Pearson says it’s worked out royalties and compensation in advance — but the company hasn’t made it clear exactly how compensation will compare to traditional textbook sales.